How to coach football

To learn how to play your favorite game of millions, the everyday and persistent physical training, and tactical and technical skills. For a footballer it is very important to train your leg muscles to develop speed, learn to accurately and confidently hit the target. To do this every day for several hours to perform a specific set of workouts. 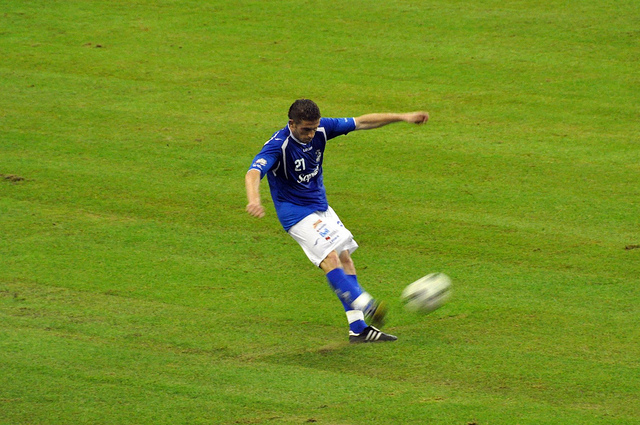 Related articles:
You will need
Instruction
1
Hard to train legs: strength in the muscles of the legs required in order to develop a high speed. It's important every day to Jogging. First, run a certain number of miles, gradually increasing the distance. Later go to run distances with obstacles. It can be running downhill, running between the trees, running in the snow in winter or on the sand in the summer.
2
Train legs, performing complex jumps. A great shell for the player is to jump rope every day, do jumping jacks on both legs, alternately on each foot, jumping over obstacles, the combination of different jumps, and also other exercises.
3
As other exercises without the ball perform somersaults back and forth from different positions, base jumping over "goat" jumps between obstacles.
4
Exercise using medicine ball weighing 2-4 kg: somersaults with the ball in his hands, juggling the ball with the hips, head, feet, holding the ball at different speed between obstacles.
5
Do the exercises that develops dexterity and reaction: throw the ball up or forward hands quickly governates forward and stand up. After the ball touches the surface, swipe it, sharply changing direction. Step away from the wall by 8-10 steps from behind the head throw the wall ball. Governates forward and catch the ball, which bounced off the wall.
6
Complete the following exercise with a partner: stand back three steps and start to juggle the ball with their feet. At the signal, direct the ball to a partner and take it back, and then continue to juggle.
7
Train the technique: the best way is to hit the ball on goal with a goalkeeper. Another way is to hit the ball on the wall. First train to hit the stationary ball, and later learn to get the ball rolling. After honing such attacks practice, tossing the ball in the air and beating it on the fly.
Is the advice useful?
See also
Показать еще
Присоединяйтесь к нам
New advices