How to kick the ball in football

The power and accuracy of hitting the ball is an important characteristics for each player in football. It often happens that the beginner has much to learn, it would seem that the simple and most basic element of playing football. 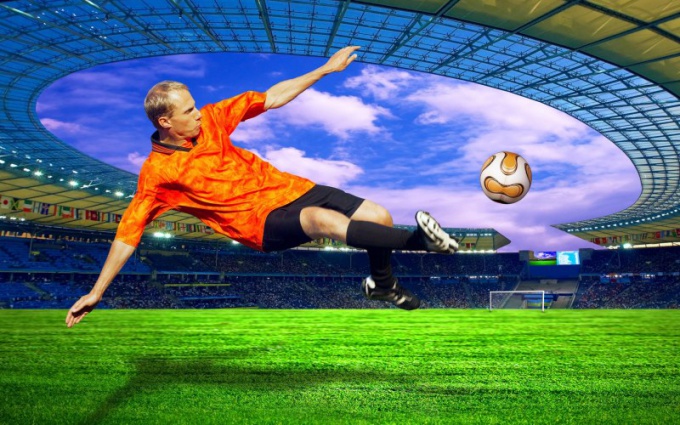 The position of the supporting leg

The most common mistake among novice soccer players – to focus only on the shock leg. But it should be understood that the support foot bears a no less important function, and it largely depends on the strength and accuracy of impact. The position of the pivot foot relative to the ball determines the shot type. Due to a direct blow you need to put this foot on the same line with the ball, at a distance of 8-10 cm If you need to get the trajectory of the ball height should be set to the supporting leg behind the line of the ball 3-5 cm, but still keep a distance of 8-10 cm in order not to lose control of the ball. If necessary the low kick to the supporting leg put over the line, where the ball is. The main point is not to put a foot too far, the player has to find an optimum distance himself.

The action of the shock leg

For an effective kick you need to remember a few rules. First, the foot must be stressed, but not too stiff. Secondly, the toes pointed downward and the heel, on the contrary, up. Thirdly, you need to beat any toe of the foot, or the location of the big toe.

The force of hitting the ball depends on proper technique of the player. With a good approach to this important element of the football novice athlete will be able to learn how to make decisive blows in the game. The most powerful blow, it turns out, if you put force on the muscles of the thigh. Beat by flexion of the leg at the knee joint is considered to be an ineffective technique that is used in football only fans. Another important aspect is not to overstrain the muscles of the leg, the impact must be sharp, and only in this case the ball will fly fast and far.

Housing plays also an important role in the technique of hitting the ball. As in the case with the supporting leg, the position of the body depends on what type of shock is needed. When the desired high trajectory of the ball should be tilted the case back. With a low – forward. The main thing is to put your body weight into the punch.

In order to pass you have to kick the ball inside of your foot. The support foot should be aligned with the ball at a distance of 10 cm bubbling foot to hit the center of the ball, continue to follow in the right direction.

Often there are cases when it is necessary to divert the ball from the opponent. In such a situation it is necessary to beat the outside of the foot. The toe of the supporting leg with the location of the enemy should form an acute angle of 20-30 degrees. Next is to make the impact of external foot in the right direction.

For fastening of the received knowledge, of course, need to practice. Only with experience comes the mastery of good technique and ball impact.
Is the advice useful?
See also
Подписывайтесь на наш канал