What are playing cards

Playing cards is a set of rectangular pieces of plastic, cardboard or paper with printed images of various motives. They can be used for games, fortune telling or magic tricks. 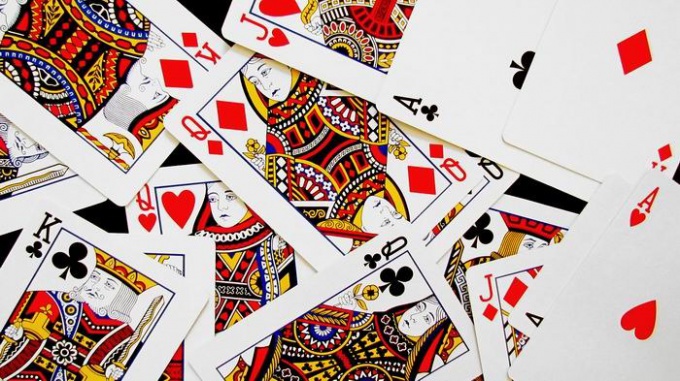 Related articles:
Instruction
1
History of playing cards more than four thousand years. It is believed that the most ancient playing cards came from China (unlike Ouija, which appeared in Egypt). In today's world there are more than ten thousand card games and a huge number of varieties and variations. For example, there are over two hundred subspecies of poker, which is currently considered the most popular card game.
2
Playing cards can be made from different materials. The most common is cardboard. Him perform the cheapest cards, but the cardboard deck from good producers can last quite a long time. Card with a thin coating of plastic will last several times longer cardboard, but the most durable are plastic cards.
3
There is and exclusive playing cards with the addition of gold, silver or other precious metals that are usually portrayed to fans of card games special occasions.
4
Playing cards can vary in size. Card size bridge is considered a standard width - of 5.72 cm and a length of 8.89 cm Poker playing cards differ from the standard by a wider base, are the same length, these cards reach width 6.35 cm
5
There are a large number of cards of unusual sizes and shapes. You can find round, triangular, pentagonal cards, and the cards are the standard form, but increased or decreased several times. Such cards are not very convenient to use, but it can be a great gift for the gambler.
6
There are several types of decks of playing cards. In a small deck — 36 cards she used to Vista, of preference, of the king, the fool and other popular games. Large deck contains 52 cards and two jokers, it is used for bridge, poker, baccarat and so on. There are a large number modified for specific game decks. For example, a deck for playing pinochle has 48 cards and a set of cards for the Canasta contains two large deck with extra jokers. For the most popular games released a ready-made decks that simplifies the lives of their fans, because not always at hand turns out of the deck with the same shirts to be able to combine them.
7
In recent decades, a large popularity of the game with unique maps that are not similar to traditional playing. These include Magic The Gathering, "Munchkin", "Potions", and others. The rules of these games can be very complex.
Is the advice useful?
See also
Присоединяйтесь к нам
New advices