How to play the card

It is very difficult to find that person who never would play cards. Ancient gambling is perceived by many merely as a means to kill time during a long road or in a boring situation where you have nothing else to do. But there are a huge number of different card games, and each game has its own rules. In addition to the usual "fool", which all are trained from childhood, there are more serious games. If you want to learn about the game of cards more and learn a few basic General rules of the professional game, then this article is for you. 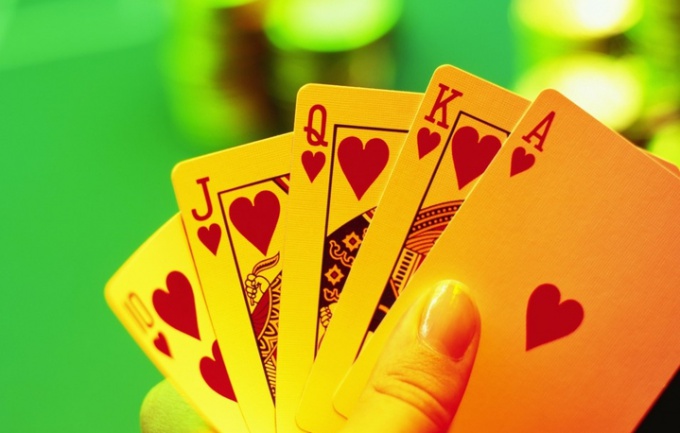 Related articles:
Instruction
1
Get to play a deck of cards. Usually the deck consists of 52 cards. Cards come in four suits that are defined by the symbol: black cross – the cross, the black upside-down heart on a stem – spades, red diamond – diamonds, red heart – of hearts. In each deck there are thirteen different denomination cards (named in descending order): ACE, king, Queen, Jack, 10, 9, 8, 7, 6, 5, 4, 3, 2, and also the deck may be two jokers. There are decks in which only 36 cards (no cards 2, 3, 4 and 5). For some games you may need a deck of cards with a different number of cards.
2
Assign places at the table. Doing this with a draw. Discuss in advance who will take the place in any case and pull the card from the deck. The winner is the one who draws the higher card. If two people pulled the same face value card, then either drag the cards, or gotta give the win to someone whose suit older.
3
In the game all actions make clockwise – so common in the game. This applies to shuffling, dealing cards, announcements during the game and so on.
4
If anyone at the table wish to shuffle the deck before the next hand, then let him do it. According to the rules any player may take on this function if you want.
5
If you take off the deck (that is, remove some cards from the top deck), remember that in the removable portion must be at least five cards. Grant to remove the deck the player who sits to the right of the player and the dealer cards.
6
First let starts the player who sits to the right of the player and the dealer cards. It is also called a senior player, and that he should make the first move.
7
In that case, if the dealer handed out the cards the wrong way, every player at the table may request to shuffle the pack and deal the cards again. Provide this function to the same person who originally handed out the cards.
8
In some games there is a system of penalties for mistakes and wrong game. Keep in mind that part of games there is a Statute of limitations of incident. That is, if after some number of minutes or moves, no one said error, in consequence he will not be able to do so.Good luck with your game!
Is the advice useful?
See also
Показать еще
Присоединяйтесь к нам
New advices