How to learn to play the Joker

Card game "Joker" will allow interesting to spend time. Wins it the one who gets the most number of points. For this you need to follow certain strategies to build a win-win combination. 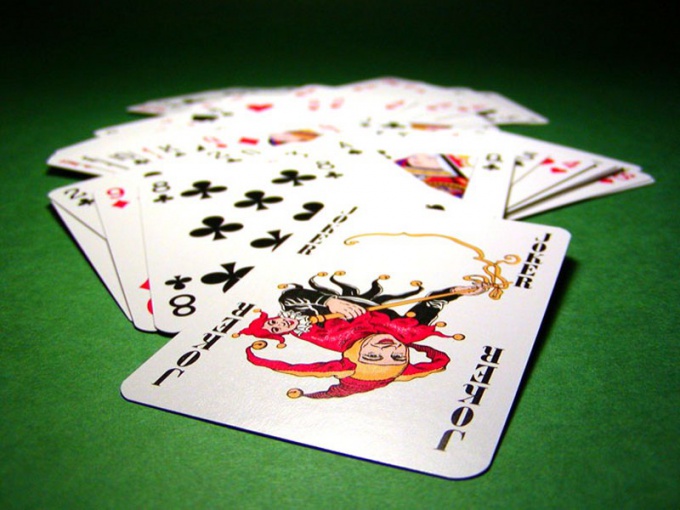 The rules of the game

For playing "the Joker" will be a regular deck of cards, consisting of 36 pieces. The six of clubs and spades play the role of Joker. You can take two of the same cards, which will be drawn this character. The card is a Joker (or a 6 of clubs, 6 of spades) the participant may declare a course on the desired to his suit, to use it as a trump, to say, to put high or low such suit.


The game consists of 4 rounds or as they call them "beanbags". The first and third bullets include 8 hands. First, players receive one card with a second hand – 2, third – 3. In the eighth, respectively, 8.

The second and third "bullet" is also similar. In these two rounds, which consist of four games, always is dealt 9 cards.

To clearly know the number of points earned, you need to record. This mission lay one of the participants in interesting actions. Usually play four (but can 2, 3 people). The drawn table. Rezinovaya 4 columns, each for a specific participant. Upstairs certain columns to spell a player's name.

Horizontally also portrayed 4 lines to make 4 cells. Each refers to one and four "bullets". In the first cell is drawn 8 count. Each corresponds to a certain move. The second 4 lines. The third cell is identical to the first and consists of eight columns, and the fourth, as two drops of water similar to the second, it to 4 graphs.

After the initial knowledge obtained, the circuit is drawn, you can begin to play "the Joker". First determine the player who will go first. You need to find in the deck the ACE and put it in the center of the table. Well now you need to shuffle the cards, give to remove part of the deck the player to the right of the dealer.

He begins to hand out one card from the person to the left of him clockwise. As soon as someone had an ACE, he declared, and the dealer gives players the cards.

It is necessary to appoint a trump. 1 and 3 round everyone is dealt the required number of cards, the next is flipped face up, it will be the trump card. If it is a Joker, the game is played without trumps. 2 and 4 "bullets" of the dominant suit will be determined differently. The person sitting to the left of the dealer, three cards first appointed him.

Now everyone looks at their cards and in turn announces how many tricks he will take. If a person has fulfilled his word, he recorded points for one trick – 100, second 150, etc. For each subsequent added 50 points. If you are dealt 9 cards, the player has announced that it will take 9 tricks and he kept his word, he spelled 900, not 500 points. Minus 200 points is the one who did not fulfill the promise and scored the fewest points.

If a player has announced a number of bribes in all hands, he is awarded bonus points. The player who scored the most points.
Is the advice useful?
See also
Подписывайтесь на наш канал