How to play solitaire Spider

This vintage solitaire remains extremely popular and in the computer age. Many have forgotten that to break it you can just on the table the most common playing cards. Like any solitaire gamebut, the "Spider" is game goal — you must consistently collect the cards of each suit. 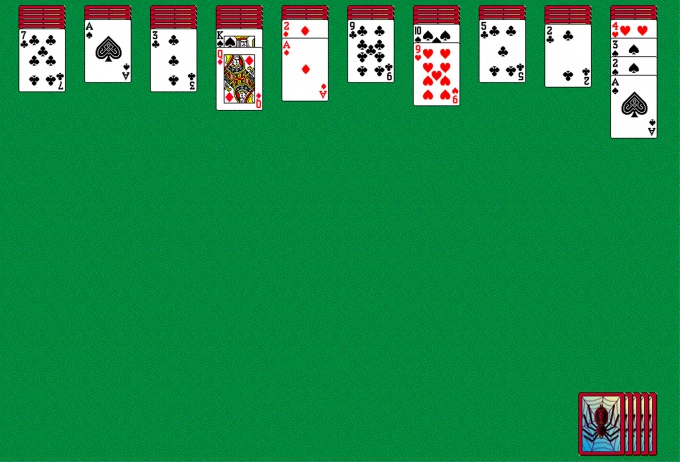 Related articles:
You will need
Instruction
1
Rules solitaireand Spider with these maps coincide with the computer version of the game. There are 3 levels of difficulty. In the first case the solitaire is expanded from the 104 cards of the same suit. The deck receives 8 cards of each value. In the second case are the cards of two suits. Accordingly, it turns out 4 cards of each value in each suit. In the third case takes just 8 decks with no jokers.
2
Well shuffle the deck. Lay in a row of 10 cards face down. In the same way put another 3 rows. Starting from the fifth row, throw the cards in the first four columns on the left side. So you have 6 cards in columns 1 through 4 and 5 cards in all the others. The bottom card in each column is open. The remaining cards lay face up. The remaining cards are spread out in the lower right corner of the field in 4 stacks. You should get 10 cards each.
3
Start to decompose solitaire. In the game of any difficulty it is necessary to shift a number of small card with next highest. In the simplest case you just put the six on a seven or a Jack on a Queen. Thus, to shift all the cards that can be transferred.
4
If among the open cards left such that you can pass on to the next in seniority, take the 10 cards that are in stacks in the bottom right corner. Put them down every column and open. View which cards may be placed in another column, open the next-highest card.
5
As soon as any of the columns, there you can put any card, taking it from any number. In this case, it is best to put the king. As soon as the outdoor series run out of cards, which can be shifted, again, take the stack from the bottom right corner and again arrange the cards in the clear down each column.
6
If the column will be consistently collected the cards from king to ACE, collect these cards and move to the bottom left corner of the field. They are no longer involved in the game. The player's task — to collect all 8 sequences.
Is the advice useful?
See also
Присоединяйтесь к нам
New advices