Card games have long been beckon. A person is a healthy passion and desire to win. Besides, this is a good way to have fun. One of the most popular card games is "101". The rules of this game are very simple, and the pleasure we get from it is unparalleled. 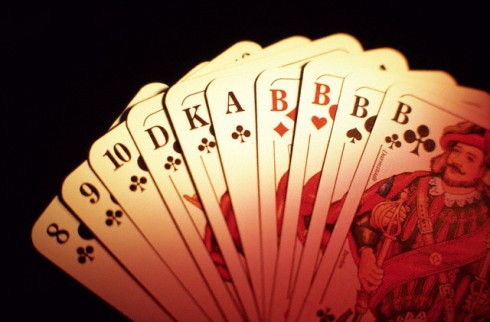 Related articles:
You will need
Instruction
1
Rossettes with friends. In "101" is usually played to 4 people. By lot determine the person who will deal the cards. Before passing be sure to carefully shuffle the deck. The face of the dealer, each player lays out five cards. Imagine losing only four cards, the fifth card is in the middle of the play, which is also called the late. The remaining deck is placed next to the con.
2
Now for the rules. The seniority of cards is determined as a simple card game, that is, numbers in order, then Jack, Queen, king, ACE. The essence of the game is to get rid of all their cards. However, this must be done in accordance with the rules of cards. Each card need to close the same suit or the same value. But some cards have their own peculiarities. Six of the opponent can only block or six cards in the suit. In this case the next player must skip a turn and take one card from the pack. Seven overlaps similarly, only in this case the next player takes two cards. If you put on a game seven of spades, the opponent takes four cards. Nine player must be close to the same value or suit, otherwise he takes cards from the deck until until you close. The overlapping of the peak of the king, the player draws four cards and loses a turn. If you put on the line a lady, you can change the suit. The very lady can be put on any card. ACE is only in the suit, or on another ACE. In this case, the next player gets a turn.
3
Play cards close to each other that are at stake. The round ends in case one player runs out of cards. Then, the other players count the points of their cards and write. So continues until, until someone will score 101 points. The values of the cards:

Other cards have points values the same as value. For example, six has 6 points. The player, who scored more than 101 points, is a loser. Then his account become zero.
Is the advice useful?
See also
Подписывайтесь на наш канал