Game rules in "a thousand two"

Card game "Thousand" is so named because the player who scored 1000 points. It can play two, three and four. The rules are not changed, but there are differences when dealing cards. 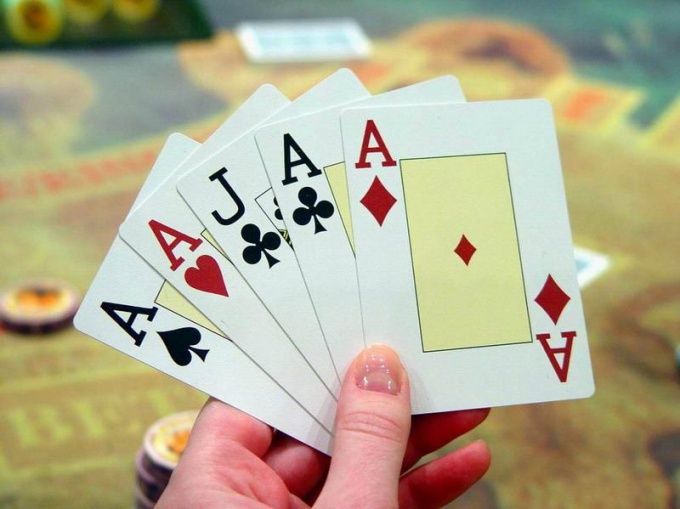 The rules of the game "Thousand"

In addition, it is important to know the rule of scoring for the combination (the marriage), consisting of the king and Queen. Their number depends on this pair suit. If you dropped the king of spades and a Queen, the game teaches 40 points. For diamonds option is given 80; of clubs enriches the player 60; and heart – 100 points. Tuzovye marriage (4 aces) brings 200 points.

If two players, then there are several options for layouts.

Each player is "one Thousand for two" is dealt 10 cards and 4 are arranged two – the picture should "look" down and be invisible to players. When you start "bidding", then the player who called the most points, which is obliged to take.

After that, he takes 2 cards from one pile and 2 throws off your unwanted second stack. If during the card game, he will be able to gain the amount of points that he declared to or even more then this player recorded the declared number of points. If he scored less points, then writes minus the number of points of gleaning before the announcement. The second writes a score, which he was able to earn their bribes and marriage.

In a three player game is dealt 21 cards – 7 each and 3 goes in a separate pile called the Talon. When playing together are almost the same. The cards are dealt to the three remaining 3 – base Talon, but the third stack don't play, and only two.

Cards are dealt to two players without Talon. Necessary in the process of the game, similar to the "Fool" cards from the remaining total of the deck.

After the cards are dealt, and if there is a widow, then start bidding for him. Their winner is the one who declared a greater number of points shall gain, others say "pass".

The maximum can be bet is equal to 300 points. It is the sum of all the cards (120) and points for marriage.

As mentioned above, the winner of the auction can continue to rule the game, he takes the Talon. If you saw him, he realizes that he is unable to dial the designated number of points to say about this and a penalty equal to the declared rate. The enemy in this case is given 60 points.

After any of the players took the first bet on the second and subsequent turns, he may declare the marriage. He gets points for that combination and the right to call trump.

During the game, two players take turns placing one card. Takes them whoever has the highest of these cards, or trump. Now his move.

When the number of points one player reaches 880, he "sits on the barrel". He is given 3 rounds, he was able in one of them to score more than 120 points, then he wins. If in 3 games he did not succeed, then it is fined on 120 points, and he "flies" with the barrel.

These are the basic rules of the card game "1000 for two". There are games where, in addition to maps, used bone.
Is the advice useful?
See also
Показать еще
Подписывайтесь на наш канал