How to play the game of hearts

Hearts are quite old and very popular game, which received its name from the name of one of the card suits. For playing "Hearts" requires the presence of four people. However, to date, appeared also a PC version, thanks to which it was not necessary to collect the company - all the rivals will operate the computer. How to play hearts? 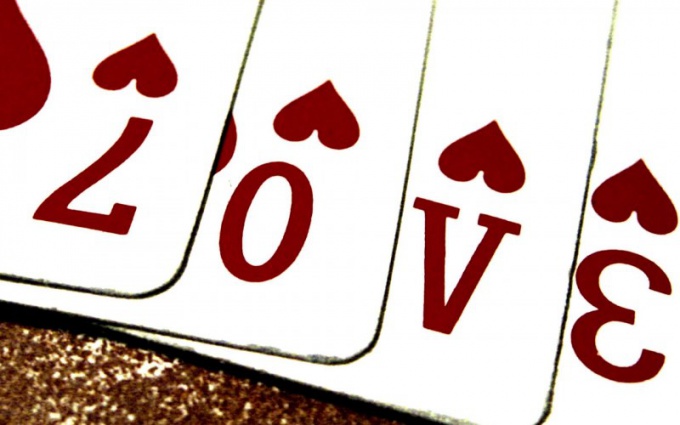 Related articles:
You will need
Instruction
1
You should know that the purpose of the game "Hearts" is the set minimum number of points. In accordance with the regulations, the highest card is the ACE, Junior - deuce.
2
Swipe the drawing of lots for the distribution of seats at the table and the choice of the banker. This requires handing out one card to all players. Hand in clockwise direction. The player who gets the lowest card, is appointed by the banker. The player with the highest card chooses any seat at the table.
3
Carefully shuffle the deck and deal 13 cards to all the participants of the game. Before the draw happens, each player must give three cards for one partner. Cards can be sent at any pre-arranged scheme. As a rule, use the following method:

- every first and fifth draw cards are passed to the player sitting on the left hand;
the second and sixth distribution - at the right hand;
- third and seventh - cross pattern;
fourth and eighth - the exchange of cards occurs.
4
Starts the game participant has on his hands the 2 of clubs. Moreover, he is obliged to go with this card.
5
The game is played clockwise. The next player must put the card of the same suit. If the suit in his arms no, he can discard any card. However, during the first draw of a bribe is forbidden to dump the Queen of spades or any card of hearts suit.
6
Takes party, marked the highest card of the suit, which was launched on the draw. The following drawing all the bribes you can start with any card. However, to play hearts only if they have already been "solved." That is, if the previous bribes one of the players has dropped a card of that suit.
7
When scoring any card of hearts suit is equal to one, and the Queen of Spades brings 13 points. If one of the participants will gather in bribes all the hearts and the Queen of Spades, he points will not be assessed, and the scores of each of the other participants you must add 26 points.
8
The game is up until one player scores 100 or more points.
Is the advice useful?
See also
Подписывайтесь на наш канал