How to play "a thousand" together

Normally, when playing cards, the larger the company, the better. But to play "a thousand" or "marriage", the optimal number is 3. However, you can play together, so not diminish interest in this game. 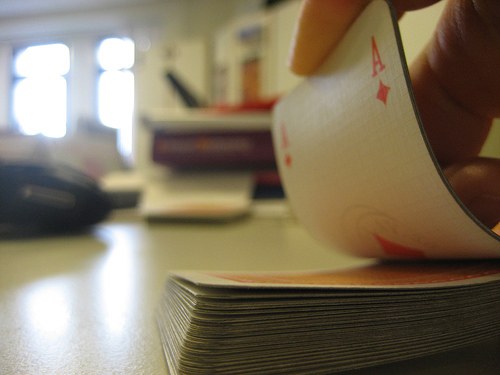 Related articles:
You will need
Instruction
1
Select from a deck of cards denoting "6", "7", "8". The value of the cards: "9" - 0 points, "the Jack" - 2 points, "the lady" - 3 points, king - 4 points, a "10" - 10 points "ACE" - 11 points.
2
Marriage is a combination of the Queens and kings of the same suit. You can declare it, only when they both you have on hand.
Pure marriage will bring you 100 points of diamonds - 80 points, cross - 60 and the Queen of marriage - 40 points. 4 aces in one hand will bring you 200 points.
3
To play "a thousand" together, distribute the remaining cards evenly, but put 4 cards in the two decks.
4
Bet first, if you are handing out cards. Otherwise, it makes your opponent. Playing in "a thousand" the two of us involves a constant alternation. The minimum bet is 100 points. further, the principle of the auction: you bet.
5
You have the right to choose "handful" of 4 cards, if the opponent doesn't beat your bet. But if you don't pick up the game stated number of points, this amount will be deducted from Your account.
6
After you get 4 cards, you have to give any 2 to your opponent. But if someone in the same hands would be four "nines", it is necessary to ReDeal.
7
You have the right to first move if he won on "auction", and will go up as long as the opponent doesn't beat your card. Trump is the suit, which marriage was declared until until another marriage.
8
"Thousand" is played together until, until you have 1000 points or it's not gonna make your opponent.
Note
When you accumulate more than 880 points, a marriage will not bring you points, and you will play without them.
Is the advice useful?
See also
Подписывайтесь на наш канал