How to open the transistor

A bipolar transistor may be open or closed condition, and in any of a plurality of intermediate States. To control the state of the transistor serves as its electrode, called the base or base. 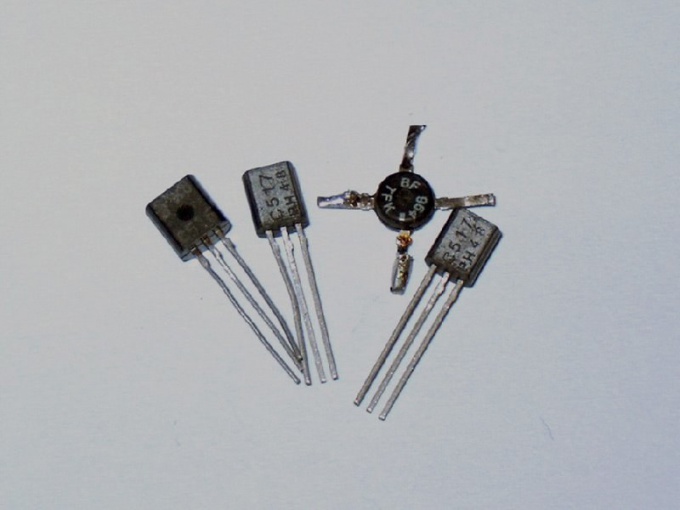 Related articles:
Instruction
1
Remember that a bipolar transistor, in contrast to the field, as well as electronic lamp, is not controlled voltage and current. The device structure of the n-p-n the current should pass in the direction from the base to the emitter (i.e., a plus to the database). If the transistor has a structure p-n-p, it skip the current in the opposite direction.
2
Before controlled by a transistor load, it must be correctly connected. The emitter of the transistor connect directly with the common wire, and the collector through the load to a power source. If you use the structure of n-p-n, this source should produce a positive voltage relative to the common wire, and if the structure p-n-p is negative.
3
Decide which mode is supposed to work: analog or key. In the first case, you will need a much larger heat sink. This is due to the fact that using fully enclosed transistor a very small current flows and completely open to a very small applied voltage. When the device is partly open, high, albeit not maximum, the values of both tension and current. For this reason, most power is allocated to the transistor when it is not fully opened.
4
Calculate what current must flow through the base-emitter transition of transistor to through the load began to pass a certain current. To do this, the desired load current divide on the dimensionless parameter of an instrument called current transfer ratio.
5
Realizing further increase in the current database, you will find that the current load is not growing. This means that the transistor is saturated. The greater the load current, the greater the saturation of the transistor of the same type the required base current. If you want to use the transistor in a key mode, always convert the mode to saturation, and heat it in the open state will be minimal. Do not, however, the base current is too large for the device began to heat up from this current.
Is the advice useful?
See also
Присоединяйтесь к нам
New advices