How to put a kick in football

Football is a simple game at first glance. It seems that the players just dribble the ball and hit it, trying to get into the opponent's goal. In fact, they need to possess a large number of skills. Formulation of the hitting the ball is one of them. 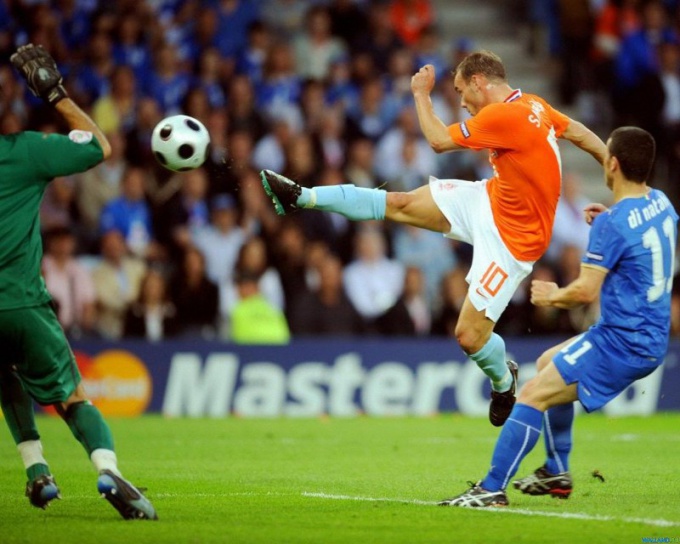 Related articles:
Instruction
1
Put the soccer ball on the point of breaking through the 11-meter strike in front of the gate. Your task is to make an accurate and strong blow, hitting into the net. Step back three big steps back from the ball. Take one step to the side. If you are right handed, move left. Left-handed, respectively, moves to the right.

2
Move closer to the ball, taking the first step shock foot. In the third step unstressed foot should be about 15 cm from the ball. Point the toes in the direction in which you want to run the shell. Keep both knees bent, put your hands wide to create a balance. Repeat this and previous step until these actions become automatic.
3
Carry batter's leg gently forward and hit through the ball inner edge of the foot. Ensure that the knee was directly over the ball at the moment of impact with the foot on it. Carry the foot on the ball so that at the end of the strike point at the target hitting the ball. Also attach the ankle to the shock to add more power. Should get a cannon shot that would knock the net through, if you did everything correctly.
4
Add power to the kick, if you have a good trenirovki the previous three steps. Hit the middle of the ball the upper part of the legs. Try to keep the index finger and ankle on the bottom during impact. Again, carry the foot to the end of the strike point on the target. There and the ball will fly! With further development of the strike staged leg should move as far as possible behind the ball.
5
Be mindful of the impact statement, giving it extra power. This can be done through hard work and perseverance, thigh and knee. Invest in a shot! Suck the legs in the gym on non workout days. But remember that accuracy and precision is always above the power of the blow. Therefore, develop all of the skills gradually and purposefully.