Who is Matrona of Moscow and whom it helps

Throughout his life, the mother Matrona prayed for people. It is referred to for help in difficult situations, asked for healing of severe diseases, has asked the Board and waited for the consolation. She never rejected anyone. Everyone who had a chance to talk with the Holy crone, has given hope and peace. It has been more than half a century after my mother's death, but many sufferers continue to expect her help and support. The relics of the righteous daily drop thousands of pilgrims 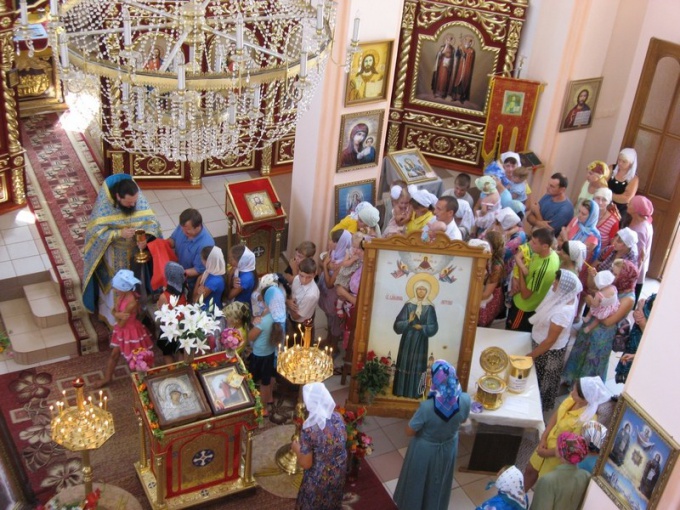 Blessed Matrona, Matrona Dmitrievna Nikonova, born in 1881 (according to other sources, in 1885) in the village of Selino, Tula province. She was the fourth child in a poor peasant family. The mother, exhausted by poverty, was going to give her child to the orphanage immediately after birth. But miracles began even before the birth of girls. Natalia Nikonova saw a prophetic dream in which her hand sat a white bird with bowed head and closed eyes. The woman recognized in this way his yet unborn daughter, and the thought of shelter was forgotten.

Matrenushka was born blind, instead her eyes were only covered by centuries of depression. Village children with their usual cruelty often taunted the helpless girl was teasing her, whipping with nettles, put in a pit to see how she will get out. The girl sought solace in prayer, he loved to be in the temple, and at night I crawls into the corner with the images and spent hours playing with them. It soon became clear that, not giving the girl's eyes, God granted her great spiritual power and insight.

My inner vision blind girl saw far more ordinary people. Already seven years Matrona predicted events, and all of her prophecies came true. Rumors about the extraordinary child spread quickly through the neighborhood, and the house Nikonovich reached the people. The girl asked for advice in worldly troubles and prayed for healing. And Matrenushka really helped — with the help of prayers, she raised to her feet even bedridden patients.

By the age of seventeen the girl was waiting for another test — unexpected feet. From that age until death to go she could not. Helped to survive the daughter of a neighboring landowner Lydia Yanovskaya, for a while voluntarily became her eyes and legs. But no one saw Matrenushka in tears and sadness. She humbly said that it is God's will and continued to heal the other exclusively.

In 1917 in Russia the revolution broke out. From ruined and ruined villages of people flocked to the city in search of work and food. The family of Marya was in Moscow, where in 1925 and moved it. By this time her brothers joined the Communist party, and the presence in the house of blessed sister constantly receiving crowds of suffering and asking for help could cause them serious trouble.

In order to avoid the repression of the brothers and his elderly parents, the girl leaves the family and until his death lived in Moscow, having neither a corner, nor even a passport. She lives, where necessary, constantly moving from house to house. It is known that authorities harassed mother and she repeatedly had to urgently move. Because of this, the legless and blind woman has studied almost all of Moscow. Accompanied her voluntary assistant — "kalanisi".

Life for the people

In this Holy Matron, as during the life called the woman men continued to work wonders in helping the sick and foretelling events. The day the old woman took up to forty people. But always repeated: "God helps, but the Matron's not a God and never took credit for his work penny. Grateful visitors just left her food. So flowed the life of the mother Matron, prayers, and brief hours of rest.

Moscow has always been left to mother the "Holy city". Anticipating the onset of the great Patriotic war and prophesying about the upcoming test, she claimed that the Germans will not take the capital, to leave Moscow it is impossible. During the war years, the matron often asked by desperate people. She comforted, encouraged, taught to pray and believe. Said that God sends trials for the scarcity of faith, but all will be well.

Being absolutely illiterate, mother Matron could accurately describe what is happening thousands of miles away from it, to predict not only the fate of individual people, went to the front, but also events of national importance. There is even a legend that at the meeting the Holy came Stalin, but reliable evidence for this is not. But it is known that she knew in advance about the outcome of the war, about what trials await the people after the great Victory, the fate of Stalin himself. Predicted Matron and his own death.

Mother died 2 may 1952 in Moscow and was buried on the Danilovsky cemetery. And in 1999, her remains were moved to the Pokrovsky monastery, located on Taganka, in the heart of the beloved city. In 2000, Matrona was canonized as locally venerated Holy Moscow. And in October 2004 she was canonized and the Church of the saints. But after his death mother continued to help and heal, in search of consolation to her grave is visited daily by thousands of people.
Is the advice useful?
See also
Показать еще
Присоединяйтесь к нам
New advices