Is it possible to buy Orthodox crucifix in a jewelry store

Currently, crosses are sold not only in the Orthodox churches, but also in jewelry stores. For some believers, the question may arise about the expediency of purchase of the crucifixion in jewellery outlets. 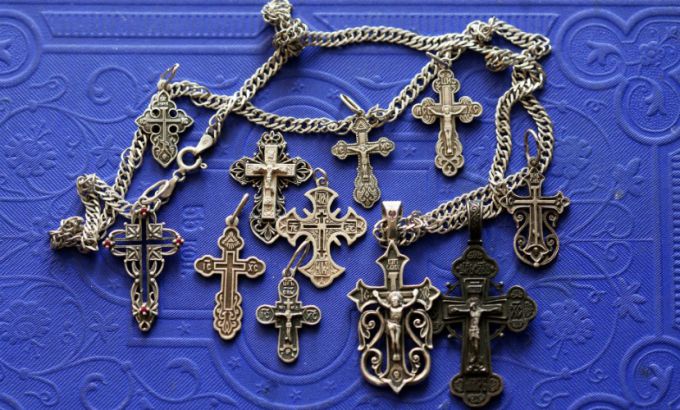 Answering the question of whether Orthodox people to buy a crucifix in jewelry stores, you need to understand that the canonical instructions for the prohibition of such acquisitions no. However, a believer often commits such a major purchase for themselves in the temple. This is due to several aspects.

The second important point - in the temple of the believer can purchase Orthodox cross. For people uninformed about the differences of crosses of the Orthodox, Catholic and other, there is an error acquiring pectoral crucifix in a jewelry store, an inappropriate Christian Orthodox tradition.

It is worth noting that these two main and important points in choosing where to purchase a crucifix categorically not talking about banning the acquisition of the crucifixion in a jewelry store. Not every Orthodox Church is rich in choice crosses (although the high cost and the external beauty of the crucifixion is not itself the purpose of its acquisition). Believer can appeal to a specific cross in a jewelry store. For example, gold or made of silver and is a symbol of the salvation of mankind. In this case, a person can buy a cross and a jewelry store. But in this situation it is necessary to have an idea about what the cross is considered Orthodox.

On the Orthodox cross each of the feet of the Savior nailed (the Catholic - used one gvozdets both legs). In addition, the turnover of the Orthodox cross should be the inscription "save and protect", or how any Orthodox prayer. Should also be the abbreviation that the cross represented Jesus Christ. Can be abbreviations IH TSI (Jesus of Nazareth king of the Jews), and the inscription NIKA (meaning Jesus Christ conquers), the Son of God, the King of glory. The cross can be as eight-pointed and eight-pointed. Generally, it is desirable to make pokupku with a man who can tell what the cross is Orthodox.

The next step after the acquisition of a crucifix in a jewelry store should be a mandatory blessing of the crucifix in the Orthodox Church.

Getting pectoral cross, the believer should clearly understand that it is not just beautiful jewelry or "charm". The cross is sacred for the Christian symbol of salvation and victory of the Lord Jesus Christ over death.