How to make cats

Deciding to get a cat, you must immediately decide whether an animal can breed or not. If you do not want to breed cats, then it is better to sterilize. But those owners who want to Tinker with the kittens need to be familiar with all the nuances of this case.

Related articles:
Instruction
1
The first time the cat comes into the hunt in 7-8 months, but to acquaint her with the cat earlier, even before 1-1,5 years it will finally be stronger, formed pelvic bones. This will allow in the future to avoid miscarriages and birth defective kittens. If the cat has never happened, it is better with the kitties to forget, late pregnancy would harm.

2
The desire of cats to reproduce is manifested by heat. The name comes from the leakage of vaginal bleeding during sexual hunting. Estrus in cats changes the behavior of the animal. Cat becomes particularly tender, for a long time she rubs against his legs, rolls on the floor and very often licks the genitals. While stroking, she bends back and takes a characteristic mating pose.

3
Estrus in cats lasts 8-15 days, but to bring the cat with a cat only when she will show to that desire enlistment meow. Sometimes cats can do to prevent male, it is the result of her memories of the previous mating against her will (rape). 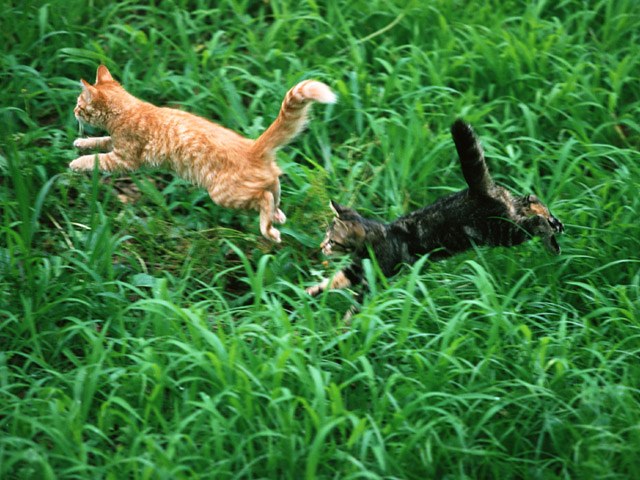 4
Generally cats are very capricious and willful. If she doesn't like the cat or the environment, it will become a hissing toothy-clawed beast. Should another time to introduce the animals in advance, try not to change the cat, as many cats odnolyubki. Pairing a cat-preferably in familiar surroundings and deliver her to the groom without the stress. But never force the cat to take the cat by force!

5
Finally everything went well. The cat is well situated to the cat and after some time let it. He grabs her by the scruff with teeth and mating. Sexual intercourse is very fast. The cat starts to growl viciously, pulled and scratched. Penis of a cat has sharp notches and causes the cat pain, but nature as it was intended that this moment provokes ovulation. For 100% fertilization of animals are kept together for 2-3 days.