How do you set the ignition on the light bulb

One of the most common ways of placing ignition adjustment with light bulb 12 V Suitable for all cars with contact ignition system. Cars and transistor or thyristor system of voltage at the ends of the distributor is not enough to spark the bulb. 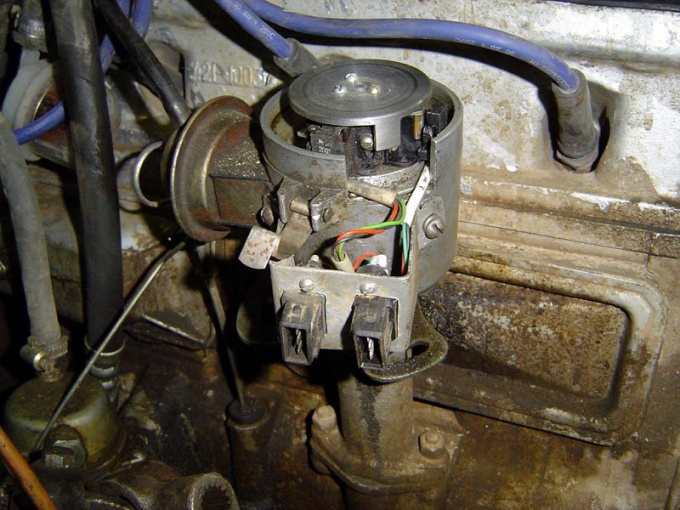 Related articles:
You will need
Instruction
1
Adjust the angle of the closed state of the contacts of the distributor (UZSK). To do this, remove the cap from the distributor and clean needle files, his contacts, removing all lumps formed-the oxides. After cleaning, make sure that the contacts are adjacent to each other the whole plane. If necessary, adjust by slightly bending the stationary contact.
2
Turn the crankshaft to a position in which the distance between the contacts of the distributor the most. Unscrew the screw that secures the contact group on the plate of the bearing and enter between the contacts feeler gauge 0,4 mm. adjust the position of the contact group, in which the probe moves with a force, and lock it by tightening the screw. Probes 0.35 and 0.45 mm check the size of the gap.
3
Use spetsklyuch for rotation of the crankshaft. In his absence perform his slow motion, carefully pushing the car in fourth or fifth gear. Do not use starter for this purpose. When the desired clearance is automatically set to the desired value UZSK, but only in new trembler collected without disturbing the technology and sizes. Therefore, perform this additional adjustment.
4
From the cover of the circuit breaker, unplug the Central high voltage wire and lean it against the ground. The wire that runs from the distributor to the ignition coil, connect a bulb. Turn on the ignitionthe red light will illuminate when opening the contacts of the breaker and off when the closure of them. Start slowly rotate the engine crankshaft clockwise.
5
As soon as the light goes out, note the position of the thumb on the body of the distributor. Also note the position of the thumb at the moment of ignition of the bulb. Measure the length of the arc on the housing of the circuit breaker. To calculate the UZSK, multiply the number PI (3,14) on the 360 and on the diameter of the distributor, and then divide by the measured length of the arc between the marks. The result will be an angle in degrees and minutes. Compare it with recommended values in the manual.
6
To adjust the ignition timing (advance angle) rotate the crankshaft so that the mark on the pulley coincides with a label on the lid of the gas distribution mechanism (see the manual). Runner distributor in this case should stand opposite the high voltage wire of cylinder 1. Connect a bulb with one wire to the wire that runs from the distributor to the ignition coil, and the other to ground. From the cover of the circuit breaker, remove the Central wire and hold to ground. Loosen the locking body of the distributor bolt. Turn on the ignition.
7
Start turning the body of the distributor clockwise until the light goes out. Then slowly rotate it in the opposite direction to the moment of switching the bulb. Once the light comes on, lock the bolt to the housing of the circuit breaker in this position. After all adjustments, check the result in motion.
8
Run the engine to accelerate to 40-50 km/h in 4th gear. With a sharp pressing the gas pedal should appear typical detonation knocks and begin a steady set speed. If no audible detonation, turn the distributor anti-clockwise by 1 division on the scale at the base of the housing. If detonation knocks last more than 1-2 seconds. turn the timer to the specified value in a clockwise direction. Repeat the procedure until detonation, lasting 1-2 seconds.
Useful advice
If, during driving tests, the position of the distributor was badly adjusted, it means there is fault in the power supply system or the ignition system.
Is the advice useful?
See also
Подписывайтесь на наш канал