How often can I do an enema

Frequent enemas dangerous addictive bowel to the relief of its direct functions, resulting in constipation. In order to lose weight they can be put no more than 1 times a week, treatment – by agreement with the doctor. If the enema is selected as an aid when fasting, put it through the day, but not more than 7 times. 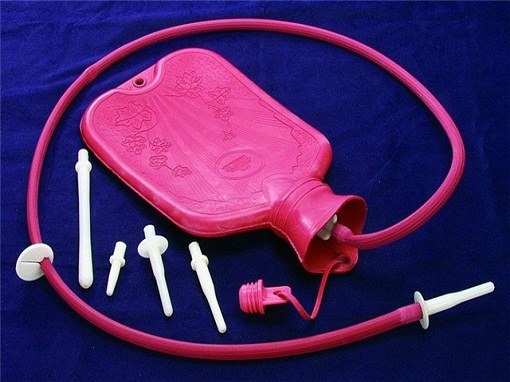 Statement of an enema: the appointment procedure of its kind

Enema is a procedure that involves the injection of fluid into the rectum. Its purpose may be different. Cleaning in order to put it for constipation, before surgery or childbirth, or before certain diagnostic tests. To carry out such a cleaning procedure with water at room temperature, which is not absorbed by the intestine and comes out along with the softened stool.

If an enema is put in order medical washing, a rubber "pear" fill solution, which can be used as special medications and suspensions, and herbal teas. The choice of this method of treatment due to the fact that rectal absorption of drugs occurs much faster than for internal use.

Nutritional drip enema was invented for feeding patients who are unconscious. Their intestines had introduced a special nutrient solution, after absorption which the patient received all the necessary materials. A worthy replacement of a nutrient enema which is actively used by doctors in the last century, has now become intravenous feeding and nutrition through a tube.

Contraindications for enemas are internal bleeding, abdominal pain, hemorrhoids, inflammation of the colon, malignant diseases of the digestive system.

How many times can you put the enema for therapeutic purposes

To eliminate intoxication that accompanies infectious disease, the doctor put an enema every day. The single fluid volume can vary within 1-1. 5 years, but the temperature must not exceed 37.5 degrees, otherwise, the warmer water will only exacerbate the intoxication, quickly being absorbed in the intestinal wall.

In order to reduce high body temperature, the enema formulation allowed up to 3 times a day. The water should be room temperature, not below. This approach allows to gradually reduce the temperature without the development of side effects.

In case of serious food poisoning in addition to the traditional gastric lavage, the doctor may recommend to get an enema several times in a row. In this case, a thorough washing of the intestine at a time, you should fill it with 2 liters of water with temperatures up to 37 degrees. On the intestinal flora, such a procedure is not reflected, as the water softens the stool and facilitates their excretion.

The long delay stool enema put once. In this case, you add the oil or glycerin. If constipation is an ongoing problem, to solve it enemas not worth it, otherwise the intestines cease to perform their functions independently. If constipation happened the child, he can only be special glycerin mikroklizmy.

Enema as a way quick weight loss can be performed using pure water or with oil or lemon.

If the enema is to lose weight, eat hearty meals is prohibited. To relieve bouts of hunger you vegetable salads and juices.

It should only 1 time a week. The water temperature should not exceed 36 degrees, and for the first procedure, you must use at least 1.5 liters of fluid. Before beginning the procedure, experts advise to drink water. About how effectively such an event, we can say the following. In the process of cleaning the bowel with an enema you can lose up to 5 kg, depending on the characteristics of the organism and its reaction to the cleansing.
Is the advice useful?
See also
Подписывайтесь на наш канал