How to connect TV cable

The need to increase the TV cable is most likely to occur when you transfer the TV to another location in the room. To not deteriorated image quality when extending the cable, you must follow certain rules. 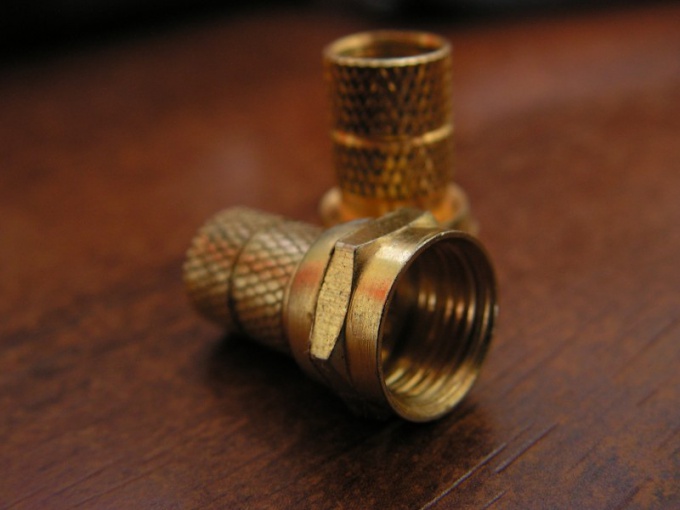 Related articles:
Instruction
1
When extending the cable, the first thing, let's see what his core. If it is from a single thick copper wire, use two standard F-connector and one I connector, you can buy them in any store that sells television equipment.
2
For a quality connection, you need to prepare the cable under the F-connector. First smoothly cut the end of the cable. Then remove 15 mm of the insulation. Do this carefully so as not to damage the braid. After removing the insulation, wrap the braid back, remove under it foil.
3
Remove ten millimeters of insulation around a Central core that is bare on the inch of the center wire. Now screw the F-connector until it stops, in this folded back braid will be clamped between the connector housing and the outer shell of the cable.
4
Speaker for the outside edge of the F-connector center wire gently pick up the cutter, so that it were only 2 millimeters. In the same way prepare the end of the second segment of the cable. After both F-connectors are screwed together with the I-connector. When nevinchany F-connectors be careful to not short between the braid and inner core.
5
If the Central wire of the multicore cable, you will need connectors for that cable type. Cut a few inches of the cable and take it with you to the store - this will allow you to choose the right connector.
6
Extend cable with stranded center conductor by soldering. With proper soldering is not observed visible signal degradation. First remove the ends to be connecting cables at the three inches of the outer insulation. Then on one cable rasplatita braid to a length of 20 mm, twist four harness and carefully saladita.
7
The second cable tidy cut braid to 15 mm. The remaining 5 millimeters saladita. Do this carefully so as not to melt the insulation under the braid. Clean the copper core of the cables is 15 millimeters, removing the insulation of two pieces. The center strand twist and carefully propagte. Two shot piece of insulation put on the Central vein and tape it, melting the insulation a soldering iron.
8
Solder the four plait braid of the first cable to tinned 5 mm braid of the second cable. Slip into the connection piece along the cut insulation from the same cable and fuse it with the cable insulation. Despite the fact that soldering can get quite a good connection, the best results are achieved when using F-connectors. This method is much less time-consuming, so it is better to use it with the right connector for your cable.
Is the advice useful?
See also
Показать еще
Подписывайтесь на наш канал