Card games from ancient times are a popular way to pass time and get pleasure from communication with other people in the game. One of the ways to spend leisure time, using playing cards, a folding solitaire. The feature of solitaire is that it does not require multiple players, and anyone can have fun folding solitaire, alone, until it converge. Here are some common types of solitaire and how their layout. 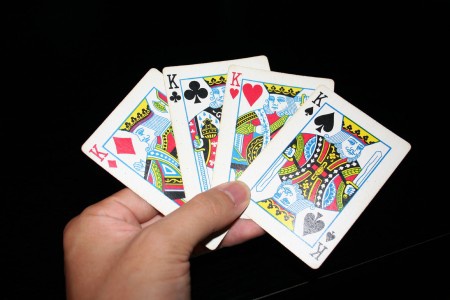 Related articles:
Instruction
1
The first type of solitaire is called "Bayan" and its goal is to collect cards in a pile. For the layout of the solitaire game you need a deck of 52 cards. Place the card in 6 horizontal rows face down.
2
See what cards are next to each other. If the right of the card is the card of the same suit and dignity, put it on the left-hand map. Thus, form piles of cards, shifting to the left in the vacated holes of the solitaire rest of the stack.
3
Another type of solitaire called "Twice two". Unlike previous solitaire, your goal is rather to lay out the entire deck. Take from the deck four cards and place them in a line face up. If the cards have the same suit, cover them with two cards extracted from the deck. You have to put in solitaire the whole pack.
4
To fold solitaire "Tree", you'll need a deck of 52 cards. Put two fir trees, each of which should be 16 cards. The goal is to dismantle both trees, moving all the cards from them in the fold.
5
Each Christmas tree is hand over one card from the deck. At the bottom cards of each tree should be maps, more or less one point than the cards put in the deck. If such cards are, move them in a stack on the map you pulled from the deck. Continue to spread on a stack of cards from the Christmas trees that differ in more or less one point of the map lying on the stack.
6
A similar principle is the basis of almost all solitaire games – they need to be spread out so as to solitaire converged, or come together in a common deck, but the deck is fully laid in the balance.
Is the advice useful?
See also
Подписывайтесь на наш канал