What are the names of playing cards

Playing cards the people are pleased to consider a small rectangular leaflets, made from cardboard or plastic, with various symbols and drawings. Use them for card games and for divination. Each card has a design and a custom name. 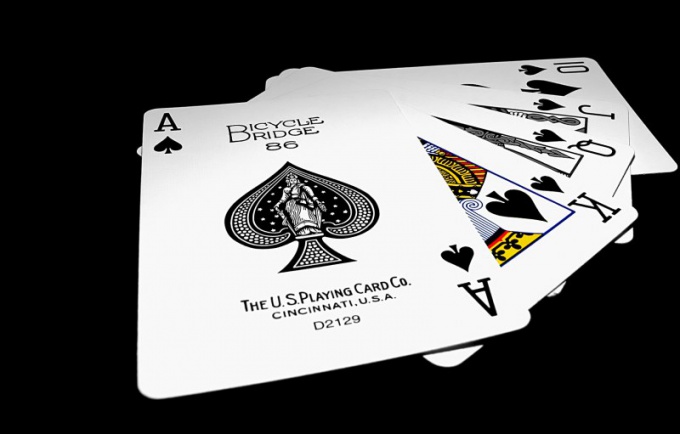 Related articles:
It is considered that the card comes from China, but also countries that gave the world card, you can safely assume Poland, Germany and France, because their peoples card game was no less widespread than in China.

The composition of the deck

A standard card deck consists of 36 cards, but this is already the modern version, however, the initial card in the deck was 54 pieces: 36 primary and 18 secondary. Each map is repeated 4 times – one in each of the four suits.

Interest names and pictures depicted on playing cards. Many are accustomed to seeing half and mirrored figures of kings and Queens, but this New trend of the time, in the old shapes of cards were drawn in full growth.

All the cards in the deck divided into four suits, which are called:
- hearts;
- diamonds;
- clubs;
- peaks.

Cards of clubs and of spades is denoted in black and diamonds and spades red. The cards carry numerical designation and image in the form of drawings. The numeric maps are the smallest highest cards, and the "drawings" are more important, such as ACE, king, Queen, Jack. ACE is the most important card in many translations it is listed as "Deputy head" or "Deputy king". The word "ACE" in Greek language means "sower of slander", and the German almost the devil. Anyway, this map is treacherous and holds a lot of power.

The position of the cards the king and Queen in the deck obviously, and the name speaks for itself. What can be said about the map Jack. Translated from the French, "Jack" is a servant, on the map it is depicted as a young man in the image of the squire.

Very interesting story of the origin of the names of the colors in the cards. Previously, instead of the usual pic or worms, were the following notations:
- cups;
- swords;
- rods;
- denarius.

The cups, which were awarded to the winners, have become over time in hearts, shaped like a Cup and heartfelt gratitude, and wands in clubs or crosses. Denarius became diamonds, and swords became sharp peaks, in fact, indicating the weapon.

In some decks there is another card, called the Joker. The map depicts the Joker, the buffoon in color or black and white, he rarely plays, but his course is always designed to confuse the plans ( maps) rivals.
Is the advice useful?
See also
Присоединяйтесь к нам
New advices