In the religions of the world the cross is a symbol of faith, but of types of crosses quite a lot. The most common shape – octagonal. It is believed that on that cross Jesus was crucified. 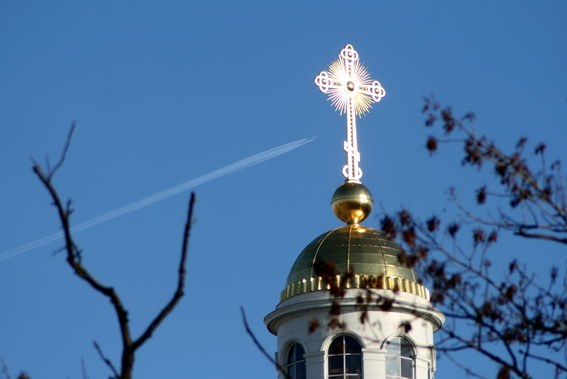 Related articles:
The eight-pointed cross consists of a vertical component and three rails. The top two are straight, and the lower oblique.

There is a version that says that the upper part of the crossbeam Orthodox cross facing North and the bottom South. By the way, exactly what establish a cross today.

Why the lower cross-beam slanting, can hardly explain even to theologians. The answer to this question is still not found. There are many versions, each of which reflects a certain idea of and confirmed by the often convincing arguments. But, unfortunately, the exact proof of anything at the moment no.

Versions based on biblical legends

Options, why is it that the lower cross-beam slanting, diverse. Consumer version explains this by the fact that Jesus stumbled on the foot, so it has warped.

There is also the possibility that the upper part of the lower crossbar of the Orthodox cross indicates the way to Heaven, and lower Hell.

Also common that after the coming of Jesus Christ on Earth was the balance of good and evil, all the sinful people previously began their journey to the light, and it is this unbalance and shows perekalivatsja the crossbar.

More plausible version of what the bottom rung is the symbolic image of such a special crossbar for the feet of a man who had been crucified. Before this form of execution was common. The person was subjected to crucifixion, but in the absence of support it is likely that under its own weight man just fell from the cross, as under the weight of his hands and feet nailed to the cross, was about to break. That's just to maintain the person in an inverted position in order to prolong his sufferings, and had invented this stand, which was reflected symbolically in the Orthodox eight-pointed cross. On average, as indicated in some sources, the time before death in this form of execution was approximately 24-30 hours.

Also in literature, the possibility that the bottom rung is only conditionally designated as oblique. In fact, this is only a schematic representation of three-dimensional figures in two-dimensional plane. And in fact, the surface of the crossbar was still smooth.

In what is still the version from proposed is to believe, it seems that everyone to choose himself, because after so many years the truth is unlikely to be someone open.
Is the advice useful?
See also
Подписывайтесь на наш канал