The icon of the virgin called "seven arrows" was written more than five hundred years ago North Russian artist. It is considered miraculous because her healing received by many people. Few people know the true meaning of this icon, and, in particular, the seven swords pictured on her... 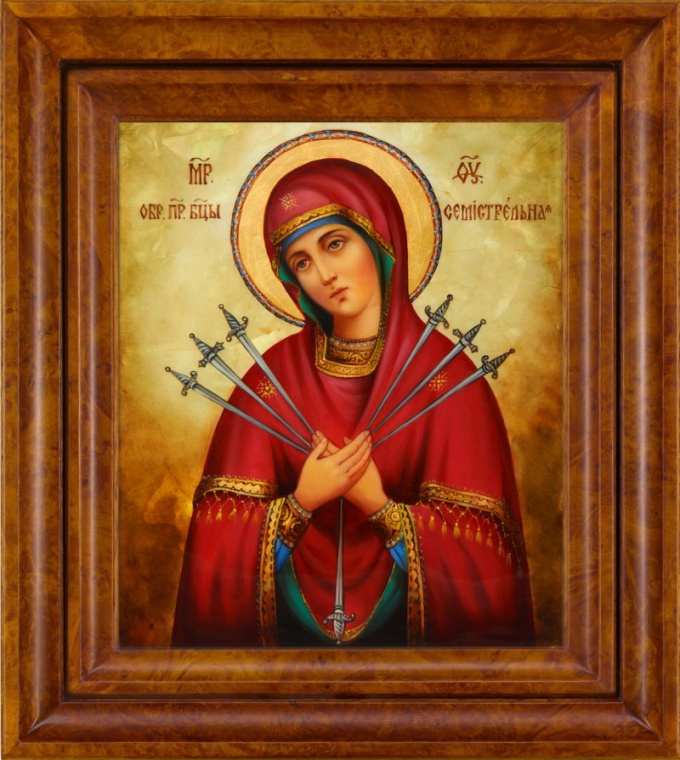 Swords and the mother of God

Traditionally, the mother of God, all the icons depicted with little Jesus Christ or other saints. At seven arrows icon, where it is pierced by seven swords, she is all alone. The swords piercing our lady on both sides and in the middle signify the pain and sorrow that the virgin Mary had experienced on earth. It is considered that this icon can create the seven wonders – but only those people who have knowledge about the keys of Solomon. Those who know the Royal Solomon key, can learn the seven arrows icon of the future in seven years.

Before the icon of the Mother of God, pierced by seven swords, the custom to light seven candles.

Seven arrows icon softens hearts so in front of her pray for peace during the war, the appeasement of implacable enemies, sending patience and healing from cholera and lameness. The number "seven" is chosen for it is not by chance – the Holy Simeon the God-receiver prophesied of the test weapon, through which must pass the soul of the mother of God. Seven swords – unbearable emotional sorrow which Mary experienced during the crucifixion, suffering and death of his divine son.

First the icon "seven arrows" made a miracle hopelessly to the lame peasant, who heard a mysterious voice in a dream, directing him to go to Theological the Church and look at its bell tower, the icon of the mother of God. Church officials didn't believe the peasant, but he was persistent – so the third time he was finally allowed into the bell tower. What was the surprise of the priests as one of the steps of the stairs the bell was trampled and dirty, the icon of the blessed virgin.

After cleansing and restoration of the icon it installed in the Church, where the farmer prayed in front of her about his healing and received it.

Then on the miraculous discovery was forgotten for many years. His second miracle "seven arrows" showed during the cholera epidemic raging in the Vologda region. The icon was moved to Vologda and placed in the Church of Dmitry Prilutsky. Religious citizens are in the procession around the city with "seven arrows" in the head of the procession, after which the cholera suddenly ceased to mow people and disappeared. After the revolution, occurred in 1917, and "seven arrows" icon was stolen from the Church of St. John the Evangelist.

Today the icon of the virgin pierced by seven swords, is the Church of Michael the Archangel and from time to time myrrh-streaming.
Is the advice useful?
Присоединяйтесь к нам
New advices