What is the significance of the icon of the Holy virgin

Intercession of the Theotokos is one of the most beloved Orthodox holidays, which is celebrated on October 14. He devoted a lot of icons. They depicted the virgin Mary extends its cover as a sign of special protection. So interpreted, this holiday in Russia. 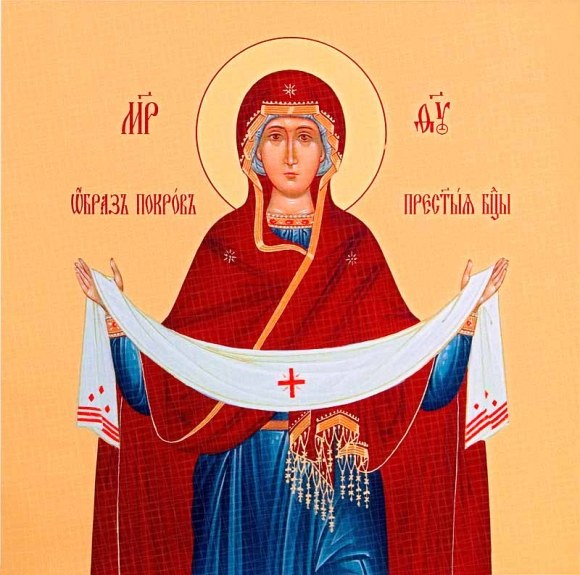 The history of the holiday of intercession of the Theotokos

The basis of the Orthodox holiday of the Intercession of the Holy virgin went to the event, according to legend, in Constantinople in the first half of the tenth century (910).

In the life of blessed Andrew the Holy Fool describes the appearance of the virgin in Blachernae Church, witnessed Sam Andrew and his disciple Epiphanius. In those days the capital of the Byzantine Empire was besieged by the Saracens. In the Blachernae Church was a sacred relic – the robe of the blessed virgin, of her belt and Morf (headdress).

Escaping from enemies, many residents took refuge in the temple in the hope of the mercy and intercession of the Heavenly Queen. During the vigil, the blessed Andrew and his disciple had a vision. Accompanied by the angels, John the Baptist and John the Evangelist, the virgin Mary came to the altar, prayed for people, and then took off his omophorion (cloak) and holding, spread it over all those gathered in the temple. As if he wanted to intercede for them before the Savior and to hide from possible harm. This miracle marked the start of a special Church service in honor of our lady.

The Russian Orthodox Church celebrates the feast of the protection from 1164. And in 1165 by Prince Andrei Bogolyubsky built on the river Nerl Church consecrated in honour of the Cover.

The meaning of the icon intercession of the Theotokos

In Byzantium it was the custom to close the image of the virgin with the veil, and, according to legend, once a week, this veil miraculously lifted several hours, opening the icon.

However, in Byzantium the feast of the protection was not. Accordingly, not developed and canons image on the icons. These images only appeared in Russia in the XIII century.

One of the earliest Pokrovsky icons – images on the Western gate of the Suzdal Cathedral. By the beginning of the next century took shape 2 versions of the same image of the Holy virgin: the virgin Mary holding the cover in his hands, or he stretched out on the mother of God.

These icons Mary is often depicted in the pose of Oranta raised for prayer hands. Cover as it hovers in front of the lady, touching her upraised hands.

On the Novgorod icon of the XIV century angels holding the hovering protection of the virgin, and above it, arms outstretched in a gesture of blessing, shines the figure of the Savior.

As a rule, both Pokrovsky multi-figure icons. Framed by the arches and domes artists depict the audience in the temple, the people blessed Andrew with the student, as well as saints, apostles, and John the Baptist. On both sides to Mary, as the motionless center of the world, rush angels.

Strict symmetry in the arrangement of figures and architectural details inherent to the intercession icons used to Express the internal unity, a holiday of unification. All faces are turned to the virgin Mary in a single light impulse. She is a wonderful cover, whose protection is granted to the entire human race. This is the main meaning of the icon the Holy virgin.
Is the advice useful?
See also
Подписывайтесь на наш канал