What are the icons of the virgin

In Russia, the virgin Mary has always been revered particularly. The virgin Mary is a patroness of Russia, and more than once helped the Russian in the fight against foreign invaders. The confidence of believers in the heavenly intercession of the mother of God is reinforced by events of the distant past, but some facts of contemporary Russian reality, which has already become history. The icons of the virgin have always been treated with great respect. Most famous faces have their own names. 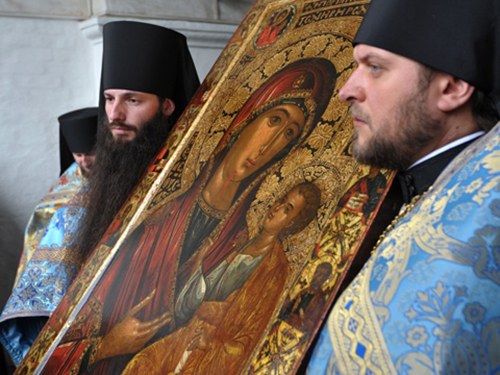 In Russia it is known about 470 names of icons of the virgin. The most famous are Kazan, Vladimir, Fedorov, Iver, seven arrows.

The Kazan icon of the Mother of God is one of the most revered in Russia. The finding of the icon took place in 1579. One day nine-year-old lady appeared in a dream the mother of God. She pointed out the place where the ruins of the burned house to find the icon. The child long did not believe. Some time later the mother the Matron with the girl really dug at the specified location an icon of the virgin. Subsequently there was built a Church and monastery. The original icon was transferred to the Church of St. Nicholas of Tula. Then the miraculous image has long been in the Cathedral of the mother of God monastery. In 1904, the Kazan icon was stolen by the robbers. Since the 16th century, there were several phenomena icons in the lists of the Kazan. The most revered three lists Theotokos Cathedral in Kazan, in Kazan Cathedral in Moscow, in St. Petersburg. The same image of our lady of Kazan was not found to this day.


The miracle-working Vladimir icon of Russia's only preserved to this day in pristine condition. Original. Is a true sanctuary. As the story goes, written by the Evangelist Luke with the image of the virgin Mary when her earthly life. Foundation icons – Board table, behind which sat the Holy Family. The icon is in Russia for eight centuries. Now kept in the Tretyakov gallery in a specially equipped vault. Orthodox can see it in the patronal feasts.

The icon "seven arrows" and "Softener of evil hearts," currently considered versions of the same graphic type. Both in symbolic form depicted the prophecy of St. Simeon to the virgin for the grief and sorrow that she will feel at the sight of the crucified Christ: "You, the sword will pierce the soul". The virgin is depicted with stuck in the heart with swords. The icons have a slight difference seven swords that pierced the heart of Mary, located on them in different ways.

According to legend, the icon, subsequently named Iver, belonged to a pious woman who lived in Ikeja during the period of iconoclasm. The woman paid the soldiers who came to take away the icon, and they agreed to leave the Shrine until the morning. Night with her son a woman went to the shore and put a icon on the water. A miracle happened – the icon floated on the water standing up. The young man withdrew to a monastery on mount Athos. From him the monks learned about the miracle. Much time has passed. One day the monks saw a pillar of fire. He rose up from standing on the water icon. After the prayer and the procession of the pious man Gabriel was honored to accept the icon. She was named Iver. In Russia there are several lists of the miraculous.

Fedorovskaya icon was in the Gorodets monastery of Nizhny Novgorod province. During the invasion of Batu Khan, the inhabitants left the city. They did not manage to get the icon, but she didn't. The icon disappeared, and 1239 was a puppet Prince. Residents of Kostroma had a vision that from Gorodets her made man, which they learned of the great Martyr Theodore Stratelates, how it was portrayed on the icons. Fedorovskaya icon is the patroness of the Romanov dynasty. After the death of the Royal family, the icon darkened so much that it became impossible to see the display. In this state she resides to this day.