What are the mother of God

Among saints venerated by the Christian Church, mother of God, pious virgin who was saving a special place in God's plan to be the mother of Jesus Christ, God the Son in his human incarnation. It is not surprising that the image of this Saint were embodied in the set of icons. 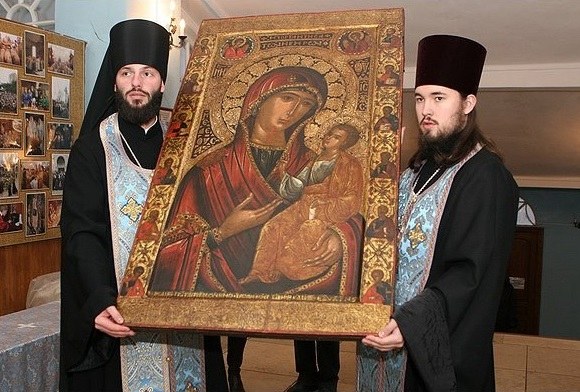 Related articles:
In the Russian Orthodox Church our lady always venerated, especially as patron of Russia. The number of Marian icons in the tens. Some of them are more known, others less – for example, a copy of the Vladimir and Kazan icons are in nearly every temple, and on the Azov or bar icon knows not every Christian.

All the different icons of the virgin is divided into three types – Eleousa, the Hodegetria and the Orans.

The Greek word "eleousa" is translated into Russian language as "lovingkindness" or "mercy". On these icons the virgin Mary is represented in a touching Union with the Divine child whom she holds on her hands. The faces of the mother and Jesus are in contact, and the halos are connected.

This image symbolizes the indissoluble unity of Earth and Heaven, the Creator and the Creation, the infinite love of God to man.

The icons of the Hodegetria type, the virgin is also depicted on the belt and with a baby on hand, but the emotion the image is more severe.

The infant, seated on the left hand of the virgin, not pressed her, and somewhat detached from it. His left hand raised in a blessing gesture and his right rests on a scroll is the Law. The right hand of the virgin is directed at the child, as if pointing out to the believers the path. Hence the name of the icon of the Hodegetria, Greek Hodegetria.

The Latin word "Orans means" praying". On these icons the mother of God is depicted in full height, with uplifted prayer hands, and often without the child. However, the image of the Divine child may be present in the lap of the mother of God, this icon is called "Great Panagia ("all Holy"). A depiction of the great Panagia is called the "Sign."

In this type of icon of the mother of God appears as the Holy intercessor, forever asking God for leniency towards people.

This classification represents only a distant view of the huge variety of Marian icons. There are many images belonging to each of these types.

On some icons the virgin is depicted surrounded by other biblical heroes – "the virgin with the prophets, "the virgin and of the blessed virgin".

The names of certain icons refer to any cities, but that doesn't mean that the icons were written there. For example, the Vladimir icon, according to tradition, was written by the Evangelist Luke, in 450 transferred from Jerusalem to Constantinople in the 12th century a copy was sent to Kiev Prince Yuri Dolgoruky, and later his son Prince Andrey Bogolyubsky took it to the North of Russia. A mother of God appeared to the Prince in a dream and commanded to leave the icon in Vladimir, and then the icon was named Vladimir.

Fedorovskaya icon is famous because it Kostroma the clergy went forth to meet the Embassy which brought the young Michael Romanov news about the election to the throne. So, the icon became the patroness of the Romanov dynasty, and the foreign Princess, marriage to Russian tsars, was not only Orthodox names, but the patronymic Fyodorovna.

Many icons of the virgin Mary dedicated to special prayers. Before some icons made to pray in certain situations, talking about it their names: "All the afflicted", "perishing", "childbirth assistant".

To tell about all the Marian icons of the impossible – a lot of them, and behind each is an important part of Christian spiritual experience.
Is the advice useful?
See also
Подписывайтесь на наш канал