A new train running in the subway

In the Moscow metro not only each station is made on an individual project, but some trains are lucky enough to get their own names and distinct from brethren of the external and internal design. This summer such "name" trains in the Moscow subway, was eight. 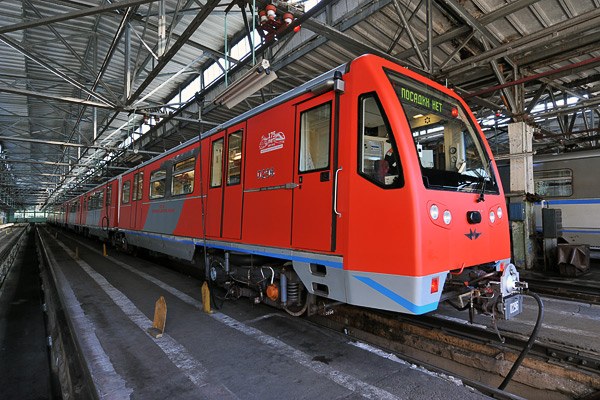 Most often, proper names provide the electric trains of the Moscow underground in memory of the people who have left an appreciable trace in the history of the country - for example, "Molodogvardeets" or "people's militia". Another reason for customizing the composition of the occurrence of any significant date. In this category, the most trains on the events in the history of Russian railway transport in General and the capital's subway in particular - "the Moscow metro in honour of 60-summer anniversary", "Red arrow - 75 years", "Moscow metro, 70 years". This category and added another one the staff, began running a metropolis on 1 August 2012.

A new train of five cars was called "175 years of Railways of Russia". Any design features its cars have, but apparently distinguished by their color - they film-coated red and grey colors, corporate shades of the company "Russian Railways". And inside of cars posted historical exposition - the walls are plastered with posters of archival photographs, documents and drawings showing the development of railway transport in the country. The exhibition presents the latest developments of the railroad, and futuristic sketches on the development prospects of rail transport in Russia.

Issue another name of the line was timed to the Day of the railwayman - 1 August, the train drove on a short stretch between the stations "Exhibition" and "international" a new branch of the Filyovskaya line. The train "175 years of Railways of Russia" there is no specific timetable, from next day he became regularly run on their normal schedule Koltsevaya line of the Moscow metro.