How to train goalkeepers

Training goalkeepers is different from training the rest of the football team. However, the goalkeeper is an important part of the team. This is generally carried out by specially trained coaches who last played as a goalkeeper. But if your team is not a special coach, please review the recommendations below to increase training efficiency. 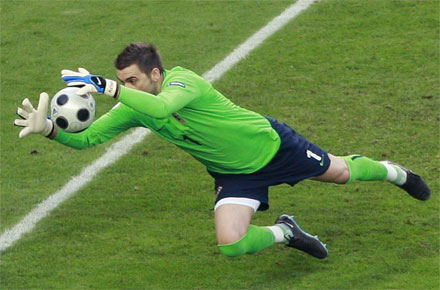 Related articles:
Instruction
1
Give the goalkeeper practice. Without match practice, the condition of the goalkeeper will sharply decline, so it is not necessary to keep a team for many goalkeepers. It is advisable to alternate players at the gate depending on the tournaments in which the team is competing. For example, the championship had one goalkeeper, and in the Cup - is another.
2
Teach goalkeepers to catch the ball. Sounds corny, but a significant part of the training of goalkeepers will take catching balls in different circumstances.Teach goalkeepers to catch the balls without falling, flying high and falling, flying low. Teach goalkeepers to catch balls that fly away from them, as well as the high balls in the jump.
3
Pay attention to hitting the balls. In cases when the ball is flying high and there is a significant chance of losing the ball is to hit it with his fists. The brush should compress and the palms turn inward. Phalanges of all fingers except the thumb, the goalkeeper must return the ball. In cases when the goalkeeper reaches the ball with both hands, he should be able to hit the ball with one hand.
4
Teach your goalkeeper to correctly throw the ball. In the case where the goalkeeper cannot handle the ball with your foot, you should throw the projectile with one hand. However, the goalkeeper should make sure that when swinging with the hand the ball will not fly into his own net.The goalkeeper should be able to sharp rotation of the body and energetic movement of the hand to send the ball forward, preferably exactly at the player for his team.
Is the advice useful?
See also
Подписывайтесь на наш канал