In the history of the Russian Empire consisted of only four persons, for their military and other achievements, granted the highest military title of Generalissimo. One of them in 1799 became invincible commander Alexander Suvorov. Following after Suvorov and the country's last winner of this title was Supreme Commander in the great Patriotic war, Joseph Stalin. 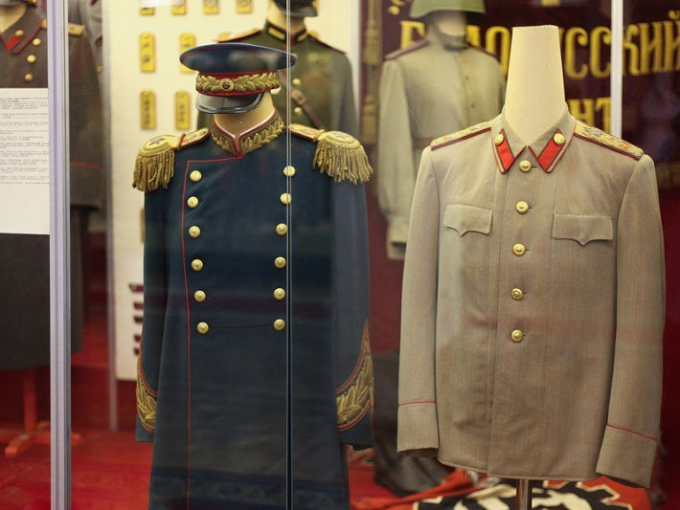 Personal military rank in the Soviet Union, abolished shortly after the October revolution, in the country's Armed forces back on September 22, 1935. A major in the red army, the worker-peasant red Army, approved the rank of Marshal of the Soviet Union. It has 41 individual. Including 36 generals, and five political leaders, including Lavrenty Beria and Leonid Brezhnev.


Its first owners two months after the Decree of the CEC and SNK were five famous Soviet commanders, who became famous in the Civil war — Vasily Blyukher, Semyon Budyonny, Kliment Voroshilov, Aleksandr Yegorov and Mikhail Tukhachevsky. But before the war of the five marshals, survived and rose only Semyon Budyonny and Kliment Voroshilov, nothing special himself at the front did not show.


The other military leaders of their own party comrades and arms were soon removed from their positions, condemned on false charges and shot as enemies of the people and the Nazi spies: Mikhail Tukhachevsky in 1937, Vasily Blucher — in 1938, Alexander Yegorov — a year later. And the last two in the heat of the prewar repressions even forgot to officially deprive the Marshal's ranks. All of them were rehabilitated only after Stalin's death and Beria.

The flagship of the fleet

By the decree of 1935 was introduced, and the highest naval rank was fleet Flagship of the first rank. The first such flagships are also repressed and posthumously rehabilitated Mikhail Viktorov Vladimir Orlov. In 1940, this title was replaced by another, more familiar to the sailors of the Admiral of the fleet, giving him four years later, Ivan Isakov and later demoted Nikolay Kuznetsov.


The next reform of the higher military ranks of the Soviet Union happened in the second half of the great Patriotic war. Then there were the chief marshals of aviation, artillery, armoured and engineer troops, and signal troops. And in the table of ranks, the Navy introduced the rank of Admiral of the fleet of the Soviet Union, similar to Marshal of the Soviet Union. In the USSR, these admirals were only three — Nikolay Kuznetsov, Isakov and Sergey Gorshkov.

The Generalissimo in the Museum

A Marshal's rank was the highest in the Soviet Union until 26 June 1945. While at "the request of the public and of the group of Soviet military commanders, led by Marshal of the Soviet Union Konstantin Rokossovsky, appeared the decree of the Presidium of the Supreme Soviet of the USSR on the establishment already existed in the Russian Empire the title of Generalissimo.


They, in particular, was the associate of Peter I, Duke Alexander Menshikov and the famous military commander Alexander Suvorov. A day after the release of the document appeared and the Soviet Generalissimo No. 1. This title was awarded to the head of the Soviet Union and the red army of Joseph Stalin. By the way, the form with epaulets, designed specifically for Stalin, Stalin never wore, and after his death in March of ' 53 she went to the Museum.


However, a similar fate awaited and the title, nominally maintained in the military hierarchy of the Soviet Union and Russia until 1993. Although some historians claim that in 60-70-ies has made several attempts to assign its new leaders of the party and the country have had front-line services and the military rank of Lieutenant-General Nikita Khrushchev and major-General Leonid Brezhnev.

The Minister of the emergency Committee

With the completion of the Stalin era have again become the main title of Marshal of the Soviet Union. The latter, to whom it was assigned, was past the path to it from a second Lieutenant and commander of a rifle platoon on the front Dmitry Yazov. In 1991, Yazov was dismissed from the post of Minister of defense of the USSR after the coup and the overthrow of the country's so-called emergency Committee. Shoot, as did the Minister of internal Affairs Boris Pugo, he decided not to.


In 1993, after Russian Law on military service instead of Marshal of the Soviet Union appeared similar to the status of Marshal of the Russian Federation. But for all 20 years of the existence of such a title could get (1997) only one Russian warlord and former defense Minister Igor Sergeyev, who died in 2006.
Is the advice useful?
See also
Подписывайтесь на наш канал