In some Russian churches, there is the miraculous icon

In the Orthodox Church there are about 1000 of miracle-working icons. This iconographic image is a source of miracles. They heal, help in case of fire and war, and myrrh-streaming. 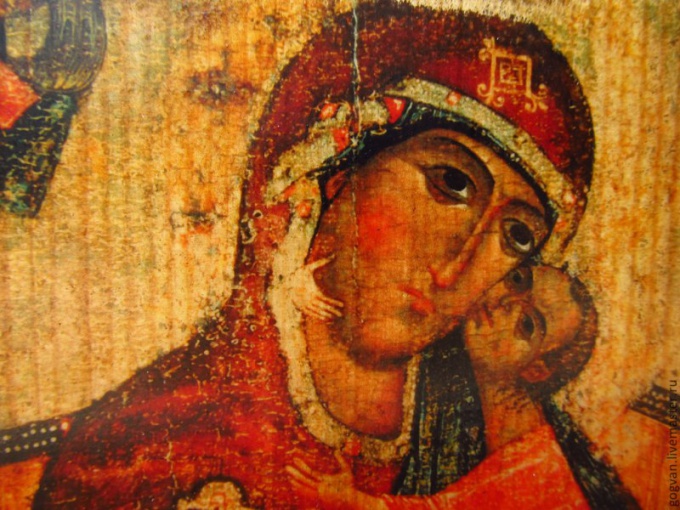 The miraculous icon of the mother of God

The tolgsk icon of the mother of God falls on the day of her miraculous finding on August 21.

The blessed virgin Mary is the patroness of Russia. It more often than other icons streaming myrrh and work miracles. In Vvedensky Cathedral of the Yaroslavl Tolga convent is the miraculous icon of the mother of God of the Tolga. This icon is the patroness of Yaroslavl.

One of the main shrines of the Russian Orthodox Church – the Kazan icon of the blessed virgin Mary - was lost. However, there are several lists of this miraculous icon. One of them is in Mordovia, city of Temnikov. There is the Nativity of the Theotokos Sanaksar monastery.

Another honor list of Kazan God's Mother is in the Alexander Nevsky monastery in Saint Petersburg. There you can worship another revered miraculous icon of the virgin Mary, called "Neva Quick to hearken".

In skorbjashchenskom a temple in the city of Ryazan is the miracle-working icon of the mother of God "joy of All who sorrow". In the Church of the village in Ryazan region Samarovo you can worship the miraculous icon of the Mother of God bogolyubskoy Samarovski. It is considered to be one of the first lists of famous Bogolyubskoy icons that stood at the gate of the ancient city Ryazan region, Pronsk.

Other miraculous icons of Russia

Due to the fact that in the 15th century it was decided to cover the icon with sunflower oil, the image of the Almighty was darkened. It is noticed that women, at least once unfaithful to her husband, can't see the icon image of Christ.

In the resurrection Cathedral of the city of tutaeva is one of the most amazing relics of the Russian Orthodox Church – miraculous image of the Savior. According to legend, this icon was painted in the 15th century the monk Dionysii of Glushitsk for the Church of Boris and Gleb. Initially it was located in the dome of the temple, then was moved to the chapel of Boris and Gleb, and in the 18th century Spas were placed in the main room of the Church.

Vladychna monastery of Serpukhov is honored by the modern list with their long-lost miracle-working icon of St. George. Since 2000, the monastic list began to stream.

At the Holy protection Avraamiev-Gorodetsky monastery, located in a small village Nozhkino Kostroma region, is the miraculous carved icon of one of my favorite Christian saints – Saint Nicholas.

Every day, thousands of pilgrims come to Diveyevo monastery in Novgorod region to worship the miraculous icon of one of the most revered Russian saints – St. Seraphim of Sarov. He has written the nuns of the Diveyevo convent in 1916. Having survived miraculously after the revolution, in 1992, the icon took pride of place in the restored monastery.
Is the advice useful?
See also
Присоединяйтесь к нам
New advices