At the age of 4-5 weeks the kittens had grown out of its awkward infancy and have not yet acquired the teenage angularity. It was during this period they are particularly cute, which often "rely" owners: this is one of the most popular periods for "pristroystvo" cat's offspring. However, to take month old kitten from a cat is premature: it still needs to be breastfeeding and maternal care. Although it looks quite independent. 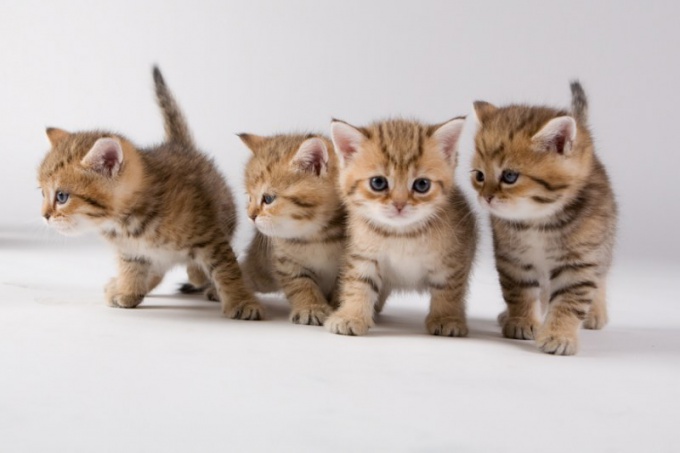 In the first three weeks of life the kittens body is clearly disproportionate: too large head, short legs, small and close to the head ears. To month but this picture is changing dramatically. The body of a kitten at this age looks proportional and harmonious, fur fluff up. The lugs are raised, and stand upright, although still look small (the impression of "big-eared" kittens will begin to produce later in two months). A healthy baby at this age looks quite plump "Kolobok" thick legs.

In the mouth of a kitten already flaunt a full-fledged dairy incisors small teeth in front of mouth. Also grow baby fangs long and sharp. They start to erupt at 3-4 weeks and are located on either side of the incisors.

Eyes monthly kittens clear, blue or bluish grey: to six weeks of age they will change its color to "adult", is constant.

The kitten in this period begins to grow rapidly and gain weight. In a month he usually weighs from 250 to 450 grams.

The behavior of kittens in one month

At the fourth to fifth week of life, kittens are beginning to explore the world, they are agile, playful and very curious. They move very confidently, though at times a little clumsy (to fully coordinate your body they start at the age of one and a half to two months). But in a month they are already starting to use the famous cat reflexes and can handle the landing after the jump on all four paws or to make a sharp turn in the jump.

About three weeks old the kittens begin to play actively with your brothers and sisters waving paws, "fight", and bite each other. To month they begin to show interest and to "outsiders" moving subjects: a variety of balls, "fishing poles" with feathers, famous paper bows. And your "sparring partner" could be the human hand.

At this time the mother cat begins less to control their offspring and enables them to move away from the socket far enough. At the same time the kittens stop feeding exclusively breast milk and transferred to a mixed diet of "milk + complementary foods", learn to lap up and eat from the bowl. With the beginning of this process, gradually the cat stops to lick the" young, but she can teach them to use the tray. Importantly during this period – to put the tray next to the habitat of the cat family and make it available for kids.
Is the advice useful?
See also
Присоединяйтесь к нам
New advices