What is a "white ticket"

In Soviet times, a white ticket was the name of the account military document that was issued to the disenfranchised (people deprived of electoral rights). In line with this ticket they were called to serve in the rear, and not in a combat unit. Now, it has a completely different designation. It means all military tickets that are issued to those who cannot serve in the army for health reasons or other reasons. 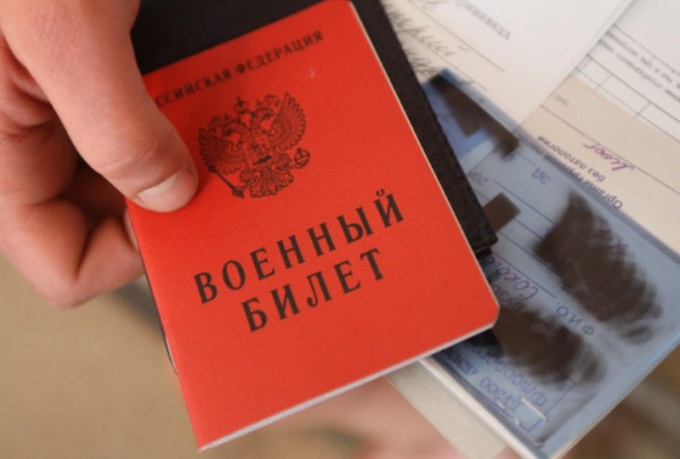 The history of the concept

There are several versions about the origin of the concept. According to the first, white tickets appeared in pre-revolutionary Russia and they were given to recruits who were unfit for military service for various reasons. The color of the tickets were just white. The other version says that the white called military tickets with the "white", that is, empty pages on which had to be recorded information about the place of passage of military service.

How to get a white card

White card is issued only for reasons related to the health condition, i.e., the recruit must pass a full medical examination in which the doctor will determine the category of validity, and only then will issue the document. Of categories, which issued a white military ticket, only two: a category "b" - limited suitability for military service (the individual is released from the call to service in peacetime and shall be credited to the reserve) and category "D" - unfit for military service (the complete liberation of the citizen from conscription and in times of peace and in time of war).

The list of diseases which exempt from conscription prescribed in "Position about military-medical examination". According to the same position a white card is given to people suffering from HIV infection, as well as drug addicts and homosexuals. In fact, a disease is not specified as this is a medical mystery.

The danger associated with a white ticket

For anybody not a secret that today, this ticket can be obtained without health problems. But it is worth remembering that the illegal issuance of a document can bring many serious problems. First, the criminal liability is provided not only to one who takes a bribe (article 290 of the Criminal Code), but for the one who gives it (article 291 of the Criminal Code). Also one of the main drawbacks of illegally obtained white ticket, is that at any time the person who issued it, may be removed from office, and then there will be no guarantee of involvement for military service. Also, if the ticket is issued because of some sort of mental illness, the holder of such a document is not allowed to have a driver's license and the right to bear arms.

White card – which, of course, the key to peace of mind for those young people who are not ready for military service. Sometimes there are really good reasons not to join the army to care for sick parents, raising a young child and the family. But you need to remember to change the category shown on the ticket, it is very difficult, and therefore, you need to think about whether you really need to get a military ID.
Is the advice useful?
See also
Присоединяйтесь к нам
New advices