What made the meat in the Ramen

The so-called fast food is sold on almost every corner. It can help to quickly kill the hunger, if there is no time and desire to cook something more substantial. 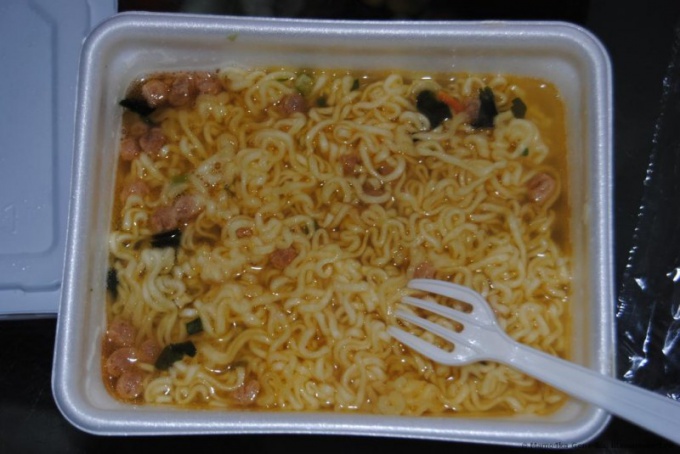 Related articles:
Such products as instant noodles "Doshirak", familiar in varying degrees to any adult. Regardless of their social status and food preferences, it is selected when you do not want to cook something more substantial. You can describe it as the first product, among other things, fast food in Russia has received wide popularity due to good advertising. A couple of decades ago for the Russian consumer this food was new, but now presents a lot of different brands of such products.

Why is it so popular products called "Doshirak"

Noodles – not only is the food cheap, but the cooking is extremely easy. These qualities are to a large extent was the reason for its popularity. For making "noodles" from the briquette noodles is enough to remove the packaging, fill it with boiling water and add seasoning from packets.

But whatever may be said about noodles "Doshirak", no matter how many commercials could show you should not believe everything that is used in advertising to create a product with a good reputation. So, for example, beautifully displayed on packages and in advertising of vegetables and meat in "Ramen" and there was not.

The company has even filed a lawsuit, demanding to remove from the packaging image of meat and vegetables. But its representatives explain that this picture is given only as one way of serving, not what is contained in the package.

If the reading of the list of what is included in the product, can be seen among flavorings and flavor enhancers such products as soy T. S. p. This is the meat, added the noodles are called noodles consumers as a wholesome nutritious meal.

What is it made of meat "Ramen"

T. S. p soy, soy meat, soy protein T. S. p – under these names hides the product, which you can use to replace meat. It is produced from defatted soy flour. Is a product of fast preparation, which contains a lot of protein and little fat. It is harmful or helpful opinions may be different.

Soy meat is made by way of extrusion cooking of the dough from defatted soy flour or soy meal and water. It turns out weight gorkovato consistency – it is crushed and dried. Soy meat is similar in structure to animal meat, in cooking it is used as its equivalent or substitute.

Before use, the dry soy meat needs to be rehydration is to boil or soak, then the source product increases its mass.

Cooking soy meat is by boiling or soaking in the broth, as happens in the case when noodles "Doshirak" pour boiling water. Dry soy meat absorbs the broth so formed to his taste, and the meat becomes suitable for human consumption or further processing. When pouring plain water no taste, of course, is not the imitation bags with noodles includes seasoning.
Is the advice useful?
See also
Подписывайтесь на наш канал