What is extreme unction

If baptism and confession heard most of the Russian people, that is the unction, the exact idea you have not even all believers. Many of this sacrament associated with communion on his deathbed. Others think that the extreme unction – a kind of magic ritual, after which the patient will either recover or die. So what is it really? 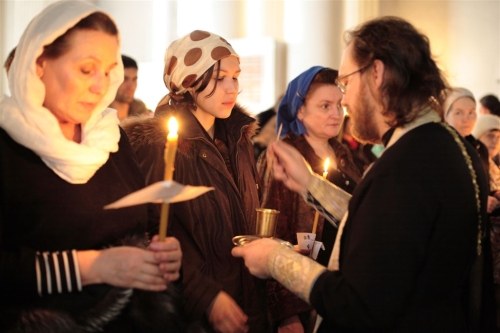 Related articles:
Extreme unction – a sacrament of purification and forgiveness of sins, which is usually several priests. It is from the Cathedral of carrying out and gone is the name of extreme unction. What's different about this Ordinance from the usual confessions, which the man also forgive sins? The fact that the confession is of a more conscious nature, intended to free the believer from those sins that he is and notice in which you may confess before the priest and God. During the Holy unction is cleansed from those sins that people may commit unwittingly and not even be aware of this report.

The power of Holy unction is very large, is not accidental it applies to alleviate the suffering of seriously sick and dying. Of course, complete healing of the sacrament does not guarantee that all the Lord's will but often it happens that after extreme unction the sick begin to feel better or even recover. Do not take this sacrament as the panacea for all ills, because every prayer known to the Lord, and is sure to be heard by them. The power of Holy unction is primarily to the individual's faith, not rituals and chants performed at the temple.

To sobrovets can like patients, and perfectly healthy, after all, to cleanse your soul and open before the Lord, man can not only in a state of severe bodily illness or death. Usually sobirautsya once a year, but if you feel the need to pass this Ordinance additionally, you should not stop yourself. For performing last rites there are no specific deadlines or canons, so if the person is ready and feels an urgent need, you need to sobrovets.

One of the essential attributes of the sacrament is the anointing with oil as a sign of purifying the body from sin. The priest smears zaborowska, reading prayers. A cycle of Scripture reading and anointing is repeated seven times, after which the faithful kiss the gospel. The oil remaining after the end of the ceremony, sonorousness can take home to commit them to the anointing. According to Church tradition this the oil is poured in the coffin of the dead, which symbolizes eternal life.

Seriously ill are afraid of the sacrament of Holy unction is not necessary. There is a superstition that it is only necessary to sobrovets dying and only when approaching feelings of the imminent end. For this reason, many people believe that last rites after their days will be numbered. This belief is unfounded and completely wrong. How can a man live in this world, independent of a particular ritual, but solely from the will of the Lord. If it so please him, aching may not be healed or you live long enough, and after extreme unction.
Is the advice useful?
See also
Присоединяйтесь к нам
New advices