Where to get Daedra heart in skyrim

Daedra heart is one of the alchemical ingredients that are used in the game Skyrim, the fifth part of the Elder Scrolls series. Since the Daedra are a very strong entity, their hearts are difficult to produce, they are expensive and not sold everywhere. 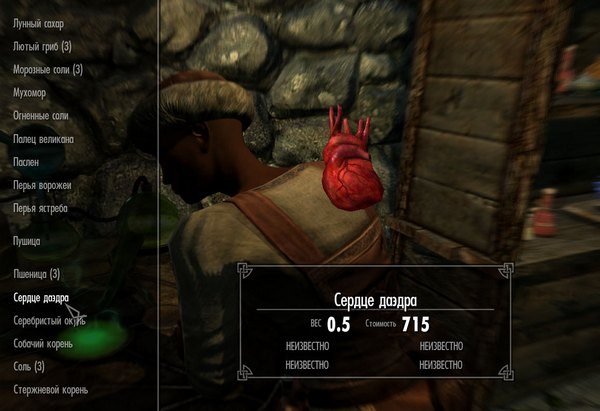 What is a Daedra heart?

Daedra in the universe of The Elder Scrolls:skyrim is a demonic entity inhabiting one of the planes of existence called Oblivion. Their hearts – a rare, powerful and expensive alchemical ingredient that can be used for the preparation of different potions: potion of restore health (when mixed with bog pods, eggs origami, blue pornototal, demonic mushroom, and other ingredients), potions "magic damage" (using the luminous dust or barnacles), potions of damage, regenerate forces, and others.

Despite the fact that in the fifth game of the famous series called Skyrim constant access to Oblivion to find Daedra hearts though difficult, but possible. There are several places to get them, and some merchants and alchemists sell this alchemical ingredient for those who have sufficient knowledge in alchemy. Daedra heart is not the unique ingredient in alchemy, it can be replaced by other substances having the same effect.


If the character eats a Daedra heart in its raw form, not in the composition of potions, then at high alchemy skill it is possible to obtain a magical effect or even more.

Daedra heart can be used not only in alchemy, but blacksmithing for making Daedric armor and weapons. On each item is a sword, shield, helmet, armor, gloves – you need one heart. You will also need ebony ingots and leather strips. To create such armor in the smithy and the legendary the Forge Atronach.

Where to get Daedra heart?

Walking in Skyrim quest "Pieces of past glory", during which you need to collect the shards of Mehrunes Razor, the character falls at the Shrine of Mehrunes Dagon, where he will have to encounter a few Daedra and kill them. All four of the demons, so for once you can get four hearts.

After completing the tasks in this location every ten days updated facilities, including new demons, so you can occasionally visit this place again to produce four heart.

The quest "Azura's Star" you can find three hearts Daedra: during the passage of the character finds a unique stone shower, gets inside it and grapple with three strong fire benders, which turn out to be demonic entities. After defeating the Daedra they can be picked up heart.

This ingredient is not necessary to get on the battlefield, especially if you prefer to develop skills such as trade or eloquence, not combat magic and weapons possession. Heart sells Daedra member of the College of Winterhold Enter, owner of the alchemy shop in Whiterun Arcadia (only after you complete the quest by delivering frost salts), sometimes hearts get caught in the sale of other alchemists if the level of alchemy you have more than 25.

Daedra heart can be found in certain locations or to steal. For example, this ingredient is in the building of Jorrvaskr in Whiterun, in the room of Codeca in the hall Watch about Danstara, in a laboratory in blackreach, in the House warm winds (available only after level 30), in the Evergreen grove in the body of the alchemist (might not be if you have a low level) in castle dour in Solitude.
Is the advice useful?
See also
Присоединяйтесь к нам
New advices