How to pass the puzzle in skyrim

In role-playing game the Elder Scrolls V: Skyrim Nordic ruins in some halls closed solid doors that can be opened only by solving the puzzle. It is often necessary to have a special key in the form of metal or stone claw and to watch carefully for clues on its surface and in other areas of the ruins. 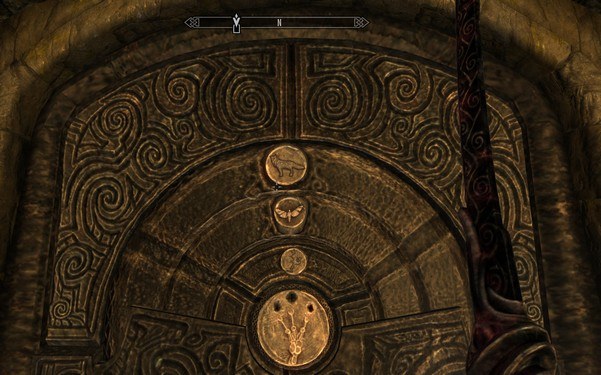 The puzzles in Skyrim

Skyrim is a bit of a puzzler: it's primarily roleplay, but to give the world the credibility it added a few simple tasks in which you want to show logic and observation, the latter is more useful.

All the puzzles are similar to each other, and deciding first on the road task, you will cope with the rest much faster.

Almost all the puzzles in Skyrim are found in the Nordic dungeon: ancient ruins, ancient cities of the main people inhabiting the land of the Nords. In the most important and ancient Nordic fortress main halls, where the remains of the dead kings and powerful artifacts are stored, tightly locked. They can open only with the key in the form of a claw. It is not enough just to put the key in the lock, you first need to pass the puzzle: positioning on the door or near the entrance signs-totems in sequence.

Typically, the first puzzle in the game is the challenge in a Windy peak. Almost all of the players who started the game, after escaping from Helge sent to Riverwood and almost immediately get there task to get Windy peak to the West of the village, beyond the river, and pick up the Golden claw.

In the same location direct on the main story quests – the court wizard of Whiterun asks you to take out the Dragon stone, so to solve the puzzle anyway.

Golden claw can be found in the ruins of the thief Arvel, entangled in a web of frosty spiders. If you are free, there are two options: to either kill him or wait for him to kill draugry. Take the key from him and find the entrance to the main hall. On the route there is one easy puzzle: to open the gate using the lever, but it only works if you rotate the stones with the symbols of the desired party. The clue is on the wall: it shows two characters and a piece of the wall with the third fell on the floor and is directly in front of the door.

Puzzle at the main entrance slightly more complicated. In the diary Arvela have a clue – you need to carefully consider claw. Open the inventory and look at the claw engraved on it three sign-totem in a certain sequence. In the same manner you need to have signs on the door, then it opens.

In most of the rest of the dungeon puzzles are the same: you only need to have a corresponding claw. In some key is not required, and to open the door, you need to correctly position standing next to the stones with the signs. Tip look here: the order of the totems will appear on the walls.
Is the advice useful?
See also
Присоединяйтесь к нам
New advices