How to do card trick

Card tricks – it's always an entertaining spectacle, attracting to itself the audience of all ages. Watching another focus, a person builds inside the head guesses about how it occurs. Children this is particularly useful – develops thinking and imagination. 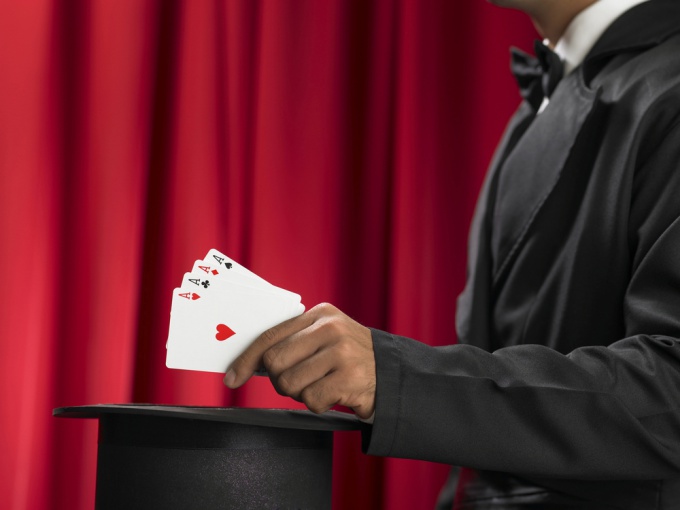 Related articles:
Instruction
1
Now we will describe a very effective card trick:
The magician takes a deck of card, the top card flips. This is ACE of hearts. Then he turned back and deposited it on the table. Flips the next card is the ACE of spades. Turn the ACE of spades and lay next to the ACE of hearts. The magician makes magical passes, flips over aces, and we see they are reversed in some magical way.
2
Training focus is this: take a deck, the ACE of spades from another deck. Have a top deck of 3 aces – 2 peak and between hearts.
3
Begin the demonstration focus: take out the deck. Spectators declare that they will now be witnesses of a kind of unexplained phenomenon (or something "magical" to your taste) and start. Captured from the deck at the same time the top 2 cards. This technique is called "double lift". Say that pulled the ACE of hearts. Turn over the cards so that the audience does not suspect that their 2. It turns out that we're delaying instead of hearts the ACE of spades.
4
Again, overturn 2 cards from the top of a "double recovery" and say that it is the ACE of spades. After turning cards face up on top of a magician lies ACE of hearts. He deposited on the table.
5
The final part of the focus: Putting on the table a second card, ask for the ACE. Turn over the card, and amazed the audience sees that they "magically" changed places.
Useful advice
To focus was more spectacular you can think of any way the false shuffle the cards before showing the trick. Even after removing 2 cards one of them to pull quietly into the sleeve and to give the audience a second to get themselves checked.
Is the advice useful?
See also
Присоединяйтесь к нам
New advices