How to do card tricks

Magic is always interesting, since during their execution the most ordinary household items are transformed into magical artifacts. With a deck of cards and a few other little things, you will be able to entertain and amaze your friends to dress up even the most boring evening. 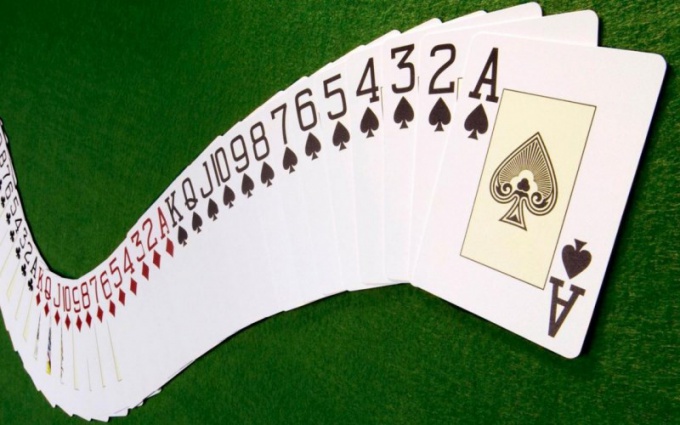 Related articles:
You will need
Instruction
1
Most card tricks are built on the principle "let me guess your card". That is, someone from the audience thinks of a card from the deck, not calling it the magician and the magician accurately guesses her. Such, for example, the focus by flipping the cards. Select from the deck the following cards: fives, sixes, sevens, and nines of all suits except diamonds. You can still take the cross, the peak of hearts and aces. It is these, because the number of figures on the two cards they do not match, but the aces look different, if the cards turn over. Put them all the same, lots of figures up, and shuffle. Just pretend that the cards choose like random, random. Then invite someone from the audience to pull out one card and remember. Then take it, flip it, and return it to the deck. Again shuffle. Lay out the cards from the deck one by one, and when you notice that one of the cards is not like the rest of us, declare that this is the hidden card.
2
A very simple trick that requires not so much training, how many free moments when the viewer will fall away or turn away. Lay out all cards into two piles – black and red. Then fold the deck, alternating card color, but they do not fold exactly on the short edge, as it were, a little pushing. Then, very carefully, but not completely, level the deck and put her in her place. Then you offer the viewer to see the focus. Take the deck and turn it with one hand – a feeling that in a deck of only red cards. Turn and turn, on the other – black.
3
One of the most famous, however, an interesting magic – "Science knows a lot hityk". To run it, shuffle the deck and take the top ten pairs of cards. Put the pair on the table face down and ask the spectator to remember any of them. Then, without shuffling the cards, start to lay out the scheme. In the scheme of four rows, each with the word "science", "can", "Yes", "hityk". Each word is located one under another. Card lay out in this order: first put in place the first letter "h", that is, it will be the first card of the first row; the second – on the second place of the letter "h", that is, the second card of the third row; the next card in place of the first letter "a", etc.
4
Then ask the spectator to name the rows in which there are pairs of cards. Knowing their position in the ranks, you'll need to define a couple of cards that made the viewer.
Note
The manuals describe the most simple tricks. More complex require to perform long training and exercise manual dexterity.
Is the advice useful?
See also
Присоединяйтесь к нам
New advices