How to do tricks with cards

Card – albeit a bit forgotten, but still a very exciting game. Rare person doesn't know how to play solitaire or to play snap. But card tricks are able not all. Although you can perform similar tricks is not difficult. 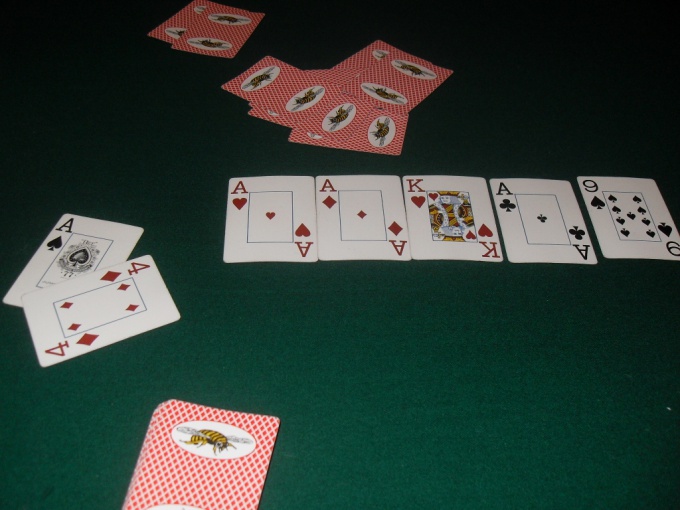 Related articles:
You will need
Instruction
1
Learn to do the trick with finding the card, make one of your viewers. To do this, take any card from the deck and remember it. For example, it will be the ACE of clubs. Lay it down the deck. Let the audience in order to choose and remember any card. Turn to enhance the effect. Let everyone be sure that you are not a peeping Tom.
2
The selected map, the viewer should keep in your hands when you turn. Beat it. Divide the deck into 2 parts. On the top put a certain card. Now the top half of the deck put down. The hidden card will be under the one you chose, ie by cross ACE. Mix the cards or let them stir the audience.
3
Expand the card fan so that you can see them, i.e., face to the audience. Pretend thought or make passes with his hands. This will give a flavor to your trick. Find the card that you chose (the ACE of clubs), make a spectator map will be directly beneath it.
4
The next trick to make it even easier – take an ordinary envelope and a sheet of paper on which is written the name of any card. Place the sheet in the envelope and close it. Select from the deck the card whose name you wrote. Put this card under the envelope, that it was not visible. Do these preparations before the appearance of the audience.
5
When the audience is there, give one of them a deck of cards, ask them to shuffle and let that you are now without touching the deck, move a specific card to the top. Ask them to put a deck of cards on a table or any other surface. Make several passes with his hands away from the cards. Gently take the envelope with the card. The audience should not see the map. Put the items on the deck. Ask the spectator to open the envelope and look at the top card. Of course, they will be the same.
Note
Card tricks is not only a knowledge of certain techniques. The most important thing to them is to create the right atmosphere and distract the viewer from your actions.
Useful advice
Before showing practice their tricks a few times. You need to be sure that everything will be fine.
Is the advice useful?
See also
Подписывайтесь на наш канал