How to learn to do card tricks

To show card tricks you must have an excellent memory, confidence in their actions and, of course, practical skills. Being able to easily manipulate the maps, you will be able to impress any viewer and feel like the center of attention. Learn the tricks is not so difficult as it might seem at first glance. 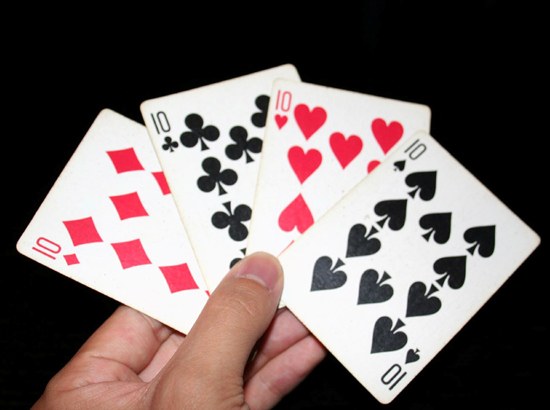 Related articles:
You will need
Instruction
1
Focus "Four aces"in Advance, prepare the deck. Count off eight cards on top and put under them the four aces. Now ask someone from the audience to name any number from 10 to 19, inclusive, and turn the table as many cards as you say. For example, if you called the number 13, you must pass on the table 13 first cards. Then fold those two digits that form your number (1+3=4), and take those 4 cards back into the deck. The next (fifth) card is put separately without turning. The remaining cards are put on top of the deck. This procedure will repeat three more times so in total you get 4 aside card. When you open your eyes, everyone will see that there were four aces. For greater effect, let the numbers to call different people.
2
Focus "a wave of the handkerchief"Take the deck of any two cards so that observers have the feeling that you got only one, and place them in a glass. The rest of the cards scatter a small handful aside. Cover the glass with a handkerchief and quietly split, taking the first hand, which saw the audience. Second hand holding the glass, remove the handkerchief along with a map, and then quietly to drop it over the deck. At desire it is possible to demonstrate that the shawl is clean and there are no cards. Do not forget to exercise, before to show someone a trick.
3
The focus of "Which cards have been taken"Divide a deck of cards into two parts. In one handful of you should have cards, starting with aces and ending with the dozens, and everyone else second. Invite one of the spectators to pull out of a handful of multiple cards and remember them. The other party must do the same with the second bunch. Ask person to put their cards in the second pile and Vice versa. Thus, it appears that a few large cards are in the deck small, and those, in turn, will be the handful of large maps. Let each of the observers will be shuffled and returned to you. Now you can make a thoughtful person and with certainty suit each participant.
Is the advice useful?
See also
Присоединяйтесь к нам
New advices