How to treat a hernia of the esophagus

Hernia of the esophagus is diagnosed at the doctor-gastroenterologist. The disease is a displacement of any organ in the abdomen (usually the stomach) through the food opening of the diaphragm into the chest cavity. Most often, this diagnosis is acquired in nature, but there are cases of congenital abnormalities when the baby is born with a short esophagus. 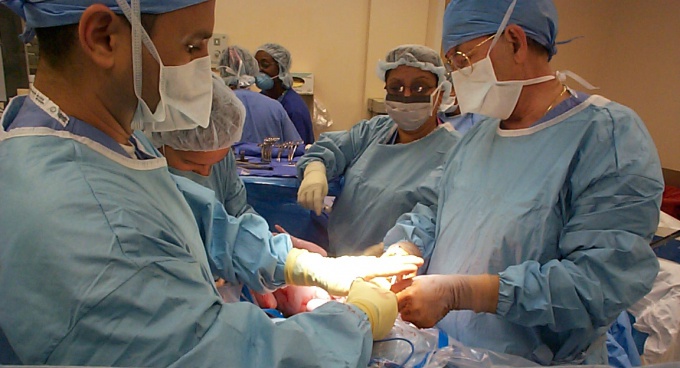 Related articles:
Instruction
1
Diagnosed disease – hernia of the esophagus – using ultrasound, x-ray and medical examination, in addition, you must give it blood. Additionally can be administered a survey called "esophagogastroscopy".
2
As a rule, the treatment of this disease can be conservative and surgical. The first is aimed at stabilizing the patient, his goal is persistent remission of disease, prevention of complications and deterioration of patient's condition. The basis of this method of treatment is the appointment of special medicines, the effect of which is aimed at lowering the acidity of gastric juice, they are well reduce gastric secretion and protect the mucosa of the esophagus from the damaging effects of gastric juice.
3
In addition, the patient is recommended fractional power, diet. Food must be taken in small portions 5-7 times a day. Parallel to prescribe a course of drugs that are preventing certain related diseases such as constipation. The patient is also need to consume at least two liters per day of clean water and more to stay in the fresh air.
4
In the case when diagnosed a hernia of the esophagus is too large, gastroenterologists insist on surgery. Surgery is indicated if no treatment results described above. Also it is performed if the patient has any complications such as erosion of the esophagus, inflammation of the esophagus, bleeding, ulcers of the esophagus, and anemia. Also if the hernia is localized in gruzevich the gate and there is a dysplasia of the mucosa of the esophagus is an indication for surgical intervention.
5
Patients can be diagnosed amlopidine sliding hernia, which may contribute to denial of education in the future.
6
The surgery is performed in hospital conditions under General anesthesia. As a rule, in the abdominal cavity peretyagivaet stomach and most of the esophagus, and through a special method narrows and strengthens the part of the diaphragm.
7
The postoperative period lasts 7-10 days under the supervision of medical staff. The patient may stand on the second day, after discharge, to forget about their disease.
Is the advice useful?
Подписывайтесь на наш канал