How to make pickled cucumbers

Crisp green cucumbers with the smell of dill and garlic they ask themselves in the mouth. In the harvest season each woman wants to treat a family salted cucumbers with crisp new potatoes. These vegetables are salted in jars, kegs, enameled pots. Just do not use aluminum cookware. Determine the capacity, go-to recipes. 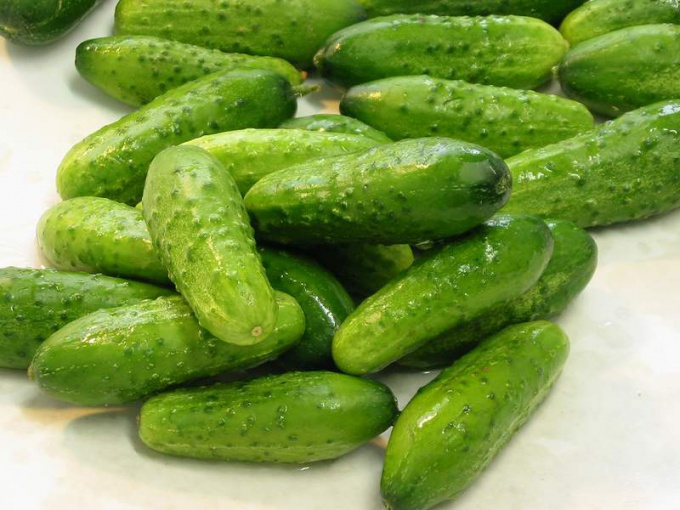 Related articles:
You will need
Instruction
1
Salted cucumbers.
Young pupyrchatye cucumbers cut off the butt, then the salted cucumbers faster. Lay on the bottom of the jar umbrella dill, garlic, currant leaves and leaf horseradish. Place the cucumbers in the jar tightly but do not squeeze them to wrinkle.
2
Make a brine. Boil water with salt, a few peas of black and fragrant pepper. Take salt at the rate of 2 tablespoons per liter of water. Slightly cool the brine, then pour it into the jar. Leave in a warm place. Through the day the cucumbers are ready.
3
If cucumbers cover with cold brine, and then hold the jar in the kitchen, then two days later you get a wonderful crispy salted cucumbers.
4
Ready salted cucumbers cover and refrigerate.
5
Cucumbers without brine.
Cut cucumbers lengthwise into two parts and put in a deep bowl. Peel a few cloves of garlic and chop it. Chop the dill. Put all cucumbers.
6
Salt the mixture and mix with your hands so all ingredients are evenly distributed.
7
Put cucumbers mixed in a tight p/e package and tie it up, before releasing all the air. Leave at room temperature for an hour. They can then serve.
8
Pickled cucumbers in 5 minutes.
Use this recipe any time of year. Cucumbers get pickled, even from a long, intended for salad. Slice cucumbers, either lengthwise into two or four parts, or cut across large chunks. Put in a plastic container with a lid.
9
Chopped fresh dill, a few cloves of garlic, a piece of horseradish root. Put the cucumbers. Add salt and close tightly with a lid.
10
Strongly shake the contents of the container a couple of minutes. Leave a little bit to stand up and again shake. Your precocious salted cucumbers ready for the table.
Is the advice useful?
See also
Подписывайтесь на наш канал