How nice it is to eat pickles! While preparing this favorite dish of all very simply and quickly. The finished pickles are popular at any table, love them both adults and children, you can take them along on a picnic as a snack. 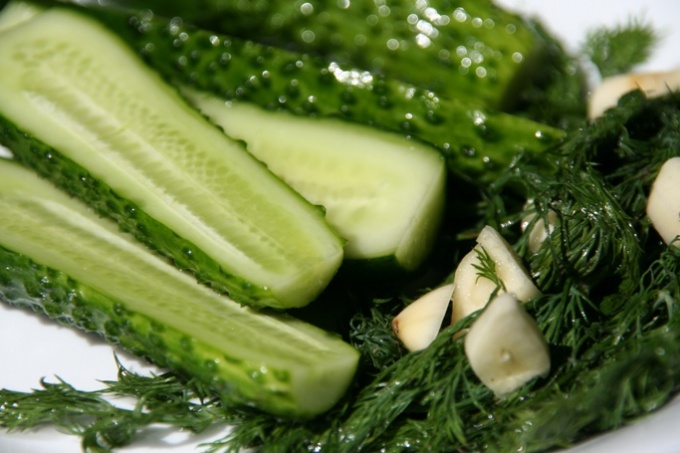 The most suitable for pickling is thin-skinned, small, young and strong cucumbers. Select appropriate cucumbers in the market, you can buy in the store. The best option when we salt the cucumbers, just taken from the garden at his dacha.

Select the desired amount of cucumbers, pre-rejected yellow or tainted cucumbers. To ensure that the salting is uniform, it is necessary to select specimens uniform in size.

Cucumbers wash cool water and dry. Then stacked them vertically in a container. Between layers put the spices and herbs.

Usually in the spices for pickling include horseradish, dill, garlic, black pepper, Bay leaf, cloves, and leaves of cherry and black currant. Sets of spices for the preparation of pickled cucumbers can be bought on the market grandmothers, if you can not collect your. Black currant leaves and horseradish keep the cucumbers firm.

The amount of the above spices to vary the taste you want. Approximately, based on half a kilogram of cucumbers take:

The preparation of the brine

To prepare 1.5 kg of cucumbers we need 2 liters of water and 4 tablespoons coarse salt.

In a saucepan, pour water and put on fire. Add the peppers, Bay leaf, cloves and salt and bring to a boil. Then a few minutes, allow the brine to simmer and filtered.

Pour cucumbers ready to pickle and cover with a cloth. After that put the tank in a warm place.

The speed of cooking will depend on the water temperature of the brine. If you fill it with cold water, should be allowed to stand three or four days, and if the brine is hot, ready to eat the cucumbers will be ready the next day.