How to cook salted cucumbers

To cook salted cucumbers are not only easy, but also fast and cheap. They look great on the table as a separate snack, and are a good complement to vegetable and meat salads. Properly cooked, juicy, and crunchy cucumbers will be appreciated by your household and guests. 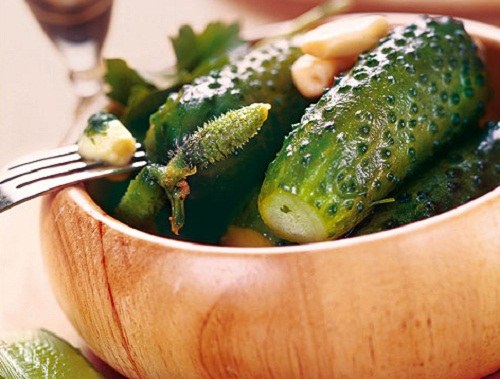 Related articles:
You will need
Instruction
1
Prepared for salting cucumbers to place in a single layer in an enamel pan. On top of them and put 3-4 umbrella dill, 3-4 fresh sheet of black currant and cherry, peeled cloves of garlic and a small handful of allspice. On top of all cover with 4-5 medium leaves of horseradish. On leaves put another layer of cucumbers and put them spices and herbs, cover with a second layer of leaves of horseradish.
2
Prepare the brine. To do this, take 1.5 liters of water add two tablespoons of salt and one tablespoon of sugar and boil the mixture. Pour the hot brine cucumbers, so they were completely covered them.
3
Tightly cover the pan with a lid. When the brine has cooled, place it in the refrigerator. Freshly-salted cucumbers will be ready to eat in a day. The thus prepared cucumbers are best stored in the refrigerator or in a cool place.
4
This option allows salting to roll pickled cucumbers in jars and store them for several months. Rinse the cucumber under cold water and cut off they have tails on both sides. Place them in an enamel deep bowl or bucket (depending on quantity) and pour cold water not less than two hours.
5
Three-liter jar of soda thoroughly wash and scald with boiling water. Fold the cucumbers into the jar, add a few sprigs of dill, 2-3 leaves of oak and cut into small pieces a sheet of hell. Pour boiling water at least 10-12 minutes. After a time drain the water and add two tablespoons of salt, one teaspoon of sugar and 150 millilitres of boiling water.
6
Boil the resulting brine and pour it over the cucumbers, and repeat this procedure twice. After the second fill into the jar, add 50 grams of table 9% vinegar, 3 drops of essence and roll it. Once the brine has cooled, move the jar in a cool place or in the refrigerator. After 2-3 days, freshly-salted cucumbers will be ready.
Note
For pickling you need to use only certain varieties of cucumbers (zasolochnye and canning).
Useful advice
It is best to use for making small, thin-skinned cucumbers (they are faster colada). To quickly pasolinis cucumbers, cut each one in several places.
Is the advice useful?
See also
Присоединяйтесь к нам
New advices