How to cope with a plague of locusts

Locust can occur because of features of development of these insects, constantly seeing their own kind, they grow faster and become more active and restless, and then begin to travel in packs to avoid overpopulation and at the same time to open other places that are suitable for life. Roaming, the pack very quickly destroys the vegetation. Partly to avoid this disaster help some types of insect control. 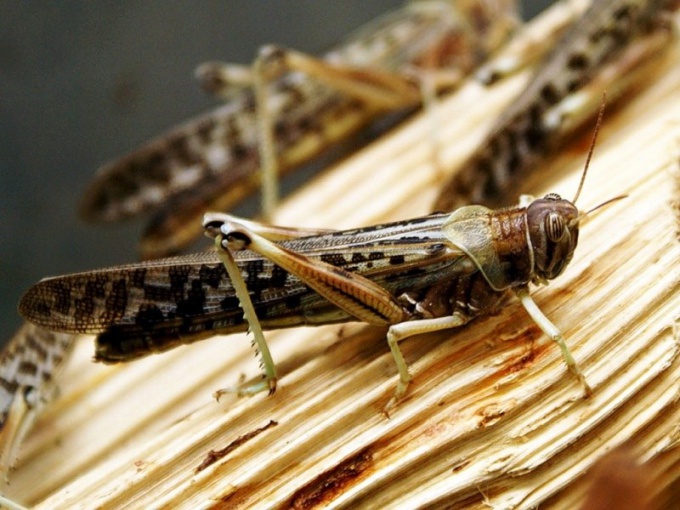 During the invasion of locusts one insect eats about 300 g of green, and the whole flock may be a few billion individuals. To the locusts destroyed the crop, there are different ways of combating these insects. One of the most effective methods some time ago was the use of pesticides. A strong insecticide could quickly destroy large swarms of locusts and even to prevent their occurrence, affecting larvae and single individuals.

However, the chemicals revealed two serious drawbacks. First, in some insects they acted too weak, and the offspring of poisoned individuals and all had immunity to some poisons. Secondly, the pesticides had destroyed not only the locusts, but sometimes the harvest. Later the strongest pesticide DDT was banned, and the more complicated the fight against locusts. However, it is possible to use some strong chemicals to destroy insects.

Another option is preventive tilling of soil, which is supposed to hold in the autumn. If carefully and deep enough to plow the land, save some insect eggs would be on the surface, and it will destroy the first severe frosts, and the other part will move too deep into the earth, and spring-hatched larvae simply can't get out and die.

In China practiced one method of locust control. The peasants build houses and tame rosy starlings and chickens. Each Starling eats about 140 insects per day, and a hungry hen can peck 10-15 individuals in just a minute. Unfortunately, this is not enough to fight large swarms of locusts, but it kind of still helps to solve the problem if you keep a lot of birds.

Finally, there is another popular method – the regular surface treatment plants, onion extract, chilli pepper or mustard. In Nigeria it was also created by biological product based on the fungus, which was called "green muscle." If you carefully pollinate this tool plants, a swarm of locusts will die, just starting to destroy the crop, and it will help to stop the invasion of insects.