As a scare crow

Ravens are some of the most cunning and intelligent birds. They live for centuries side by side with a person, ruining crops and destroying the harvest. These birds are very fast solving tricks by which people are trying to protect their gardens. So you have to invent new ways to scare. 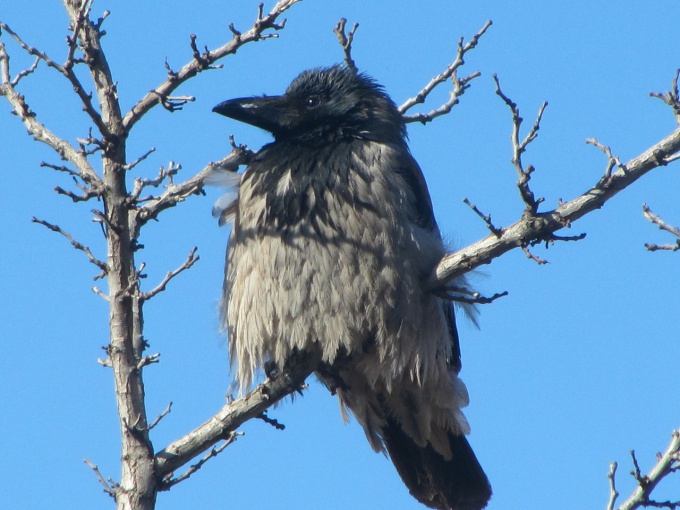 Related articles:
Instruction
1
The first option is to scare off crows - world famous stuffed. Only make it may need. That it is not just like a human, and was moving and making sounds. To static Boo birds quickly get used to and is not afraid.
2
The stuffed frame is made of two sticks or slats. Long set vertically into the ground. Short prihvatyvaya rope at the level of 2/3 from the ground. It is secured so that when the wind could swing and move. The vertical stick is worn on top of a plastic bag. On it, draw the eyes, mouth, nose, and stuff it with rags, so that he resembled a human head. The torso can be made from old shirts, bag, piece of burlap. To the improvised hands are tied plastic bottles with buttons or pebbles inside. For air movement, they will make loud noises and scare crows. The more stuffed like a person, the less likely that birds arrive in the garden.
3
Crows are very afraid of sudden loud sounds. This fear can be used to save their crops. Record on tape the sound of gunfire, the crackle of tearing cloth, the sound of breaking glass. As soon as you see a cluster of crows in the garden - play the tape. Birds will fly away and another hour or two will not be disturbed.
4
And there is a high-tech method of scaring crows. In large Department stores where they sell the goods for the house, or on the Internet look for ultrasonic repeller birds. The cost of this device is not high - about 3000 rubles, and the benefits are undeniable. The repeller runs on solar and is equipped with a motion detector, having a large radius of action. When birds arrive on the infield, the device is automatically activated and begins to emit ultrasound. In addition there is an option that allows you to simultaneously turn on the siren and bright lights. If sunlight is not sufficient, the repeller can run on standard batteries. It can be used in areas not equipped with electricity.
Is the advice useful?
See also
Присоединяйтесь к нам
New advices