How to insert the bobbin

Having a sewing machine, it is possible to realize a variety of ideas and imagination, sewing and repairing garments and interior design, to create accessories, and more – but sewing on the machine only when it is equipped with all the necessary parts and if you know how to install them correctly. Before you start to sew anything on the sewing machine you have to fill not only the upper but also the lower thread that is wound on the bobbin. 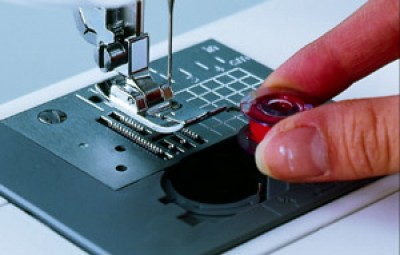 Related articles:
Instruction
1
Insert the bobbin in the sewing machine very simple. To begin, fill in the machine upper thread take the spool of thread of the desired color and slide it onto the rod. The end of the thread pass through the thread guide and thread between the plates of the regulator thread tension.
2
Then thread the thread through the hole of the thread take-up lever. Threading a thread through the last loop, loosen and cut off the tip at an angle with sharp scissors. Then gently insert the tip of the thread into the eyelet of the sewing needle from the outside of the long groove. On the opposite side of the needle, pull the thread and get her back, stretching under the presser foot.
3
Now is the time for the bobbin thread. Take the bobbin out and wind it on the thread manually or by using a mechanical winder. Take the bobbin so that the filament tip was sent in a circle from left to right, and in this position, insert it into the bobbin case.
4
The direction of the thread in the bobbin should match the direction of the slot in the bobbin case cap. Pull the end of the thread out of the slot, and then take the cap and insert at the appropriate place in the bottom of the sewing machine. If you hear a click, then the bobbin is installed correctly.
5
Several times on itself, rotate the flywheel, holding the tip of the upper thread. After the needle once falls and rises, pull the tip of the upper thread and pull the tip of the lower thread from the bobbin. Both filaments pull back and slide under the presser foot.
Is the advice useful?
See also
Показать еще
Подписывайтесь на наш канал