To speak openly about any personal interest is not always resolved even men. In such cases, about the feelings of the representative of the stronger sex the woman can tell the non-verbal signs of sympathy, gestures and facial expressions, and behavior. 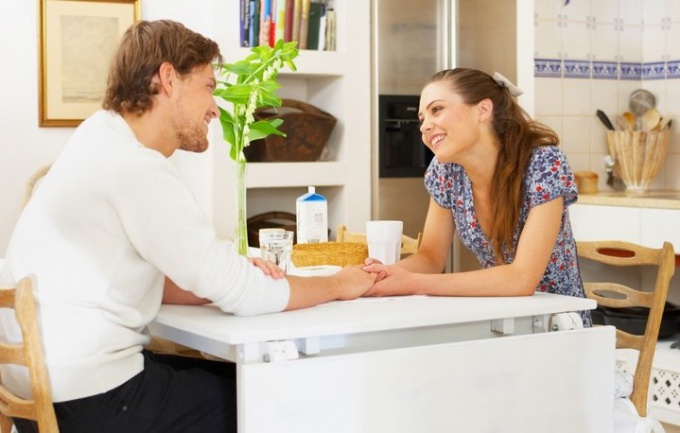 Gestures and facial expressions of sympathy

Most of the information people receive is not from words but from gestures, facial expressions, body position and intonation of the interlocutor. Men's non-verbal signs of sympathy is manifested more markedly than women's, however, to interpret their needs in a complex, otherwise you risk being mistaken for sympathy, embarrassment or any other feeling.

The woman in the presence of a good-looking man begins to preen – she for hands, hair, face, sneaking looks in the mirror. Men also tend preening in the presence of an interesting person – they corrected the tie, smooth or, on the contrary, sheresheva hair, pulls a shirt and a jacket to pull. But since these signs may indicate nervous condition, pay attention to the gestures associated with the belt. Experiencing sexual attraction male often corrects the belt lays over his fingers.

During a conversation with a pretty special men increase pupils, and eyebrows slightly raised up. His gaze slides around the woman's body – from head to toe. And if the man doesn't even try to hide his interest and considering the lady virtually without stopping, it shows his sexual desire.

To any woman a man wants to touch. At every opportunity he will support you by the arm or touch of the shoulder. Such gestures not only indicate a liking to you, they are a kind of signal of the owner – a man subconsciously thinks you already won.

The behavior of a man in love

When a group of people lovely women man seeks to stand out from their environment. He can start to speak louder, telling jokes and funny stories from life. Body the body of a man is usually turned in the direction he is interested in women, and the eyes slip down her body.

Male interested in conversation tends to come closer to a pretty woman, as if closing it from the world. It is a kind of possessive gesture of a lover.

Will tell about the interest and tone of voice of a man: when he speaks with the object of sympathy, the voice becomes softer and gentler and barhatisto. During the conversation the man is usually slightly inclined to the interest of his woman.

Another sign of affection – throwing on the shoulders of the women of his coat. This act speaks of the desire to protect and warm lovely lady and is a kind of "marked", since putting on his jacket, the woman smell of a man and becomes his "property".
Is the advice useful?
See also
Подписывайтесь на наш канал