How to become a Boxing trainer

Speaking on the topic of how to become a good coach, some boxers, not batting an eyelid, say that it is very simple. Like, enough five times to go in and out, and you're ready coach. In every joke, as you know, there is a grain of truth. The latter is, in particular, that without your performance in the ring and tremendous personal experience to train other fighters difficult, and not very possible. 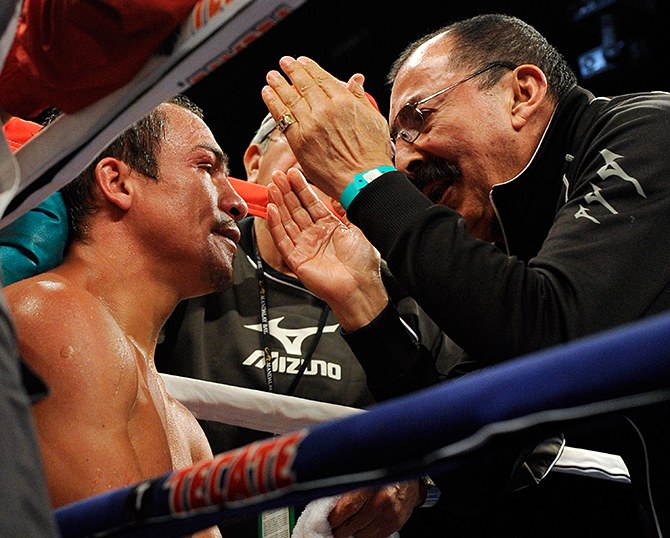 The first thing needs to think about future Boxing coach (and to start work in the General group, and not personally with any single fan of the ring and the bell): how to get a proper education. To begin with, of course, you need to graduate from high school, better in parallel with a specialized sport by becoming at least a candidate master of sports. Then it is advisable to enroll in a physical or in teaching, but with the sports faculty of the University, which try to get, albeit quite formal, higher education.

Why "formal"? Just for anybody not a secret that active professional athletes in almost no time, effort, and sometimes the desire for a full and stable school. Therefore, term papers and even thesis they, with the consent of the teachers, usually the rent is not during the official sessions, and when the offseason comes or the need arises to cure the trauma. Or even when I finish the current athlete and many years later after admission. As, for example, former world champion among Amateurs and professionals Konstantin Tszyu, has recently become coach of the world champion in heavy weight under one of the professional versions of Denis Lebedev.

Of course, entering the University, the Academy, or at least in College sports, the potential coach should choose his Boxing specialization. Although, perhaps, in the world there are the only ones able to train brutal boxers, graduating from the youth Academy, youth sports school, chess or figure skating. Trying to get the required diploma, do not forget about their own training and fighting, to raise the Boxing skills and intelligence. After numerous jokes about supposedly stupid boxers using the head only to eat and wear in the ring of the helmet, nothing more than sarcasm. Often described by the boxers.

Eighteen years is the age not only for University admission and receiving a summons to the army, but also for the transition of the athlete from youth to senior sport with much more stringent requirements on the skill level. Junior who wants to subsequently teach others must go through the adult school of Boxing. First of all, of course, on the official competitions below the national championship, becoming at least the master of sports. By the way, having achieved such a title, but not having higher education diploma, too, can count on employment as a coach. For example, in some small village or in a club without special claims, where the absence of a potential coach of the document on education can be treated leniently.

And teacher, and a psychologist

But to become a good coach in a professional sports club or even in an easy section for beginners boxers, only dreaming of fame Tszyu and Lebedev, one of the set strike is not enough. Although the presence of, for example, "jab", which is a virtuoso of the legendary Muhammad Ali, is also important. This specialist must be an outstanding teacher, methodologist, teacher, psychologist, have a modicum of medical knowledge, the ability to understand the degree of talent he trains a young boxer, sensitivity, attentiveness, patience and even a sense of humor.

So, according to two-time medalist of the Olympic games deserved the master of sports Viktor Rybakov, one of his coaches, ex-champion of Europe on Boxing Viktor Ageev, in one battle literally shook the athlete. In particular, the fact that in between rounds there was nothing to talk about tactics and strategy of combat, not started error, provide intelligent advice and to encourage "harder to beat", but just told a funny joke. Then rashochetsya and received positive emotions Fishermen literally brought his opponent out of the ring as they win.

If the athletes get the categories and titles, coaches — professional category. With them, they gain the opportunity to work with the relevant group of boxers, from beginners to members of the national team. In Russia there are four categories. Elementary — just a coach, a recent graduate of sports technical school, University, or special courses. Second — the coach, the students who won medals at the national competitions and the title of candidate master of sports. The first coach of the winners of the Championships of the country, received certificates of masters of sports. Higher coach, trained in coaching High school, worked for many years and has trained Champions or prize-winners of European and world Championships and the Olympic games, who have become masters of sports of international class and honoured masters. In addition, these professionals are rewarded and, as a rule, the title of honored trainers of the country.
Is the advice useful?
See also
Подписывайтесь на наш канал