How to remove gallbladder

Cholecystectomy is performed under General anesthesia in two main ways — laparoscopic and open. The first method is minimally invasive and does not require a long rehabilitation. To traditional surgery is resorted to only in extreme cases where the bubble are quite large stones or present in the abdominal cavity scar tissue. 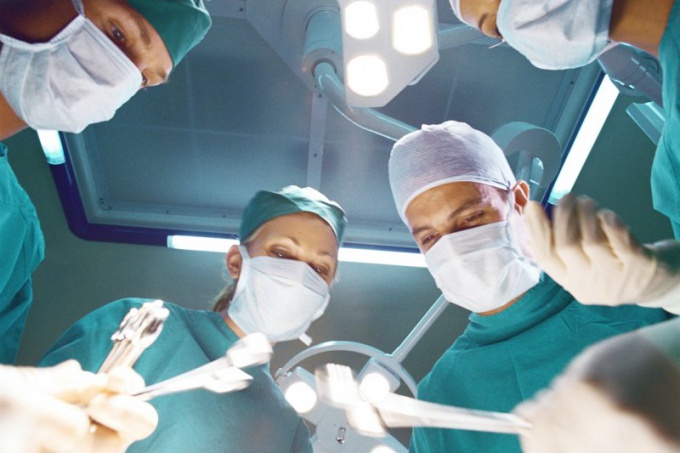 Related articles:
Removal of the gallbladder, or cholecystectomy is a radical method of treatment of diseases of the gall bladder, e.g., gallstones.

Laparoscopic surgical treatment is a modern method which is carried out most surgical operations. To do this, use a thin surgical instruments – trocars, which are inserted through small incisions in the abdominal cavity. Perform this operation under General anesthesia. The patient is asleep and does not feel pain.

In projection of the gallbladder make four small incisions, two of which have a length of 5 mm and two 10 mm. Through one of the slits introduced into the abdominal cavity tube having on the end a tiny video camera. Then spread the tissue for introduction of a trocar. Under General anesthesia the patient is inflated with gas the stomach. For this purpose, carbon dioxide. Through the other two incision injected other surgical instruments. Find the gallbladder and remove it.

The next stage is cholangiography. This is a special method of radiography to determine abnormalities of the bile duct. If there are no problems in the bile ducts suture all the cuts. The duration of laparoscopic cholecystectomy varies from one to two hours.

This method gallbladder removal is not for everyone. The presence of scar tissue from previous operations, complications, or big stones, you must do a large incision. In such cases, conducting an open cholecystectomy.

Complicated form of cholecystitis and the presence of large stones require a different surgical approach, which is called open cholecystectomy.

Traditional cholecystectomy just below the rib cage on the right, the surgeon makes an incision up to 15 cm in length. To access the liver and gallbladder is removed, the back muscles and tissues. Then shift the liver and the open gallbladder. Arteries, veins, ducts intersect the bladder, while the gallbladder is removed. Check the common bile duct for the presence of stones. This is very important because at the duct from the liver receives the bile into the small intestine. When inflammation or infection of the abdominal cavity in the surgical wound for a few days, leave a small drainage tube for the outflow of exudate. Then the incision is sewn up. The operation lasts approximately two hours.

After cholecystectomy the patient is transferred initially to the intensive care unit, and when the body recovers from anesthesia in the ward. Further rehabilitation depends on the type of operation conducted. The duration of hospital stay after laparoscopic surgery is the day, and after an open cholecystectomy two to three weeks.
Is the advice useful?
See also
Подписывайтесь на наш канал