How to relax in Tyumen

In 2163 kilometers from Moscow lies the city of Tyumen - the first Russian city in the Urals, which was founded in 1586. According to tradition, this occurred on July 25, as reads the plaque on the rock, located on one of the squares of the city. Modern Tyumen is located on the site of the ancient settlement in the books of history and local lore called Tyumen Kingdom or the great Tyumen. 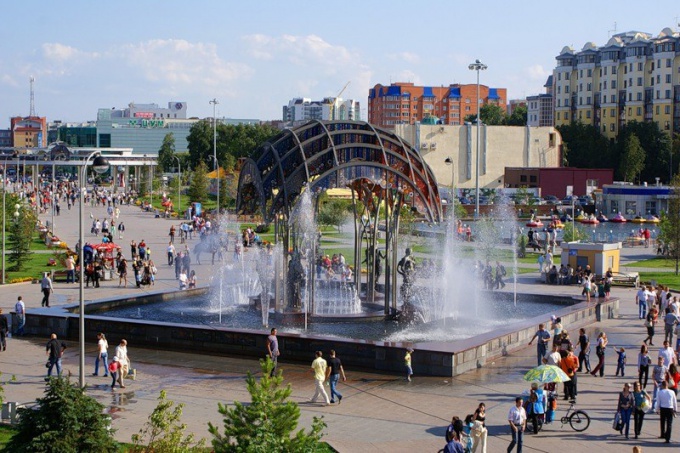 Next to the stone in honor of the founding of the city, which is located at the beginning of Lenin street is the Eternal flame. One of the places to visit for every tourist is the Bridge of lovers. Even in rainy weather a lot of people here. This cable-stayed pedestrian bridge was opened July 25, 2003 – 417-the anniversary of the founding of the city. Above the entrance to the bridge there is a clock, which should remind everyone, it is time to love and be loved. Area under the clock is a favourite meeting place for citizens. This bridge come almost all newlyweds. Come in here and couples, including adolescents, who also hang locks on the fence and throw the keys into the water.

Another romantic place of Tyumen – honeymoon lane. Here, too, come to be photographed on the wedding day. To the marriage was long and happy, on the arch above the alley you need to tie a bright ribbon. Legend has it that if you touch the sculpture, which stands in the alley newlyweds and wish to meet my true love, the wish will come true within a year. Honeymoon lane – the perfect place to relax. Near the beautiful fountain, there are convenient benches, a Playground with a sandpit and swings. The alley newlyweds to ring Home defense.

Popular among the residents of Tyumen is Tsvetnoy Boulevard. The only pedestrian Boulevard in the city unites in a range of sports, circus, fountain square, arts Square and the Square of lovers. The Central square is a fountain decorated with glass illuminated within. At night this fountain is a real spectacle of water and light. Almost every object Tsvetnoy Boulevard surrounded by superstitions and beliefs. For example, if you find "kilometer zero" - a symbolic circle and throw it in the center of the coin, you need to try to get into the center marked by a star. If it happened, her wish will come true. Walk along the Boulevard all day. Here is a Park of attractions, cafes and restaurants and other establishments.

Of particular interest to tourists may cause the Siberian cats Square. During the great Patriotic war from Tyumen to Leningrad, has just been released after the siege, sent a few thousand cats to rid the city of bred in great numbers of rats. In the Park you can see 12 cast iron sculptures of cats, cast on the draft Marina Elchibaeva. The Siberian cats square is located on Pervomayskaya street.

For many years Tyumen drama theatre was located in a small building that was once a salt warehouse of the merchant Andrew Tekucheva. However, in 2008, the troupe moved to a new home in the area of 400-anniversary of Tyumen. The theatre has 3 auditoriums: small, large and experimental. The large hall has a capacity of 735 spectators. Technical equipment of the theatre is very modern, and dressing rooms, as noted by Director Vladimir Menshov, who visited the opening of the new building, reminiscent of the "avenues by which to go." The Opera house has ramps for people with disabilities. The total area of 31.5 thousand square meters. A day here playing 4-5 shows, and in the lobby is a permanent exposition "the art of Theater in Tyumen".

In 2004, they completed the reconstruction of the Tyumen circus. Contemporary circus is now the complex has an original architecture and design, the creation of which spent about 170 million roubles. From the arena to the dome of the circus of 24 meters. At the same time to watch the presentation here may 1600.

If you ask the indigenous inhabitants of Tyumen, where they advised me to go to a tourist, they will almost certainly direct you to the Museum of Geology, oil and gas. Here you can get acquainted with that part of the city's history, which is associated with the development of natural resources. Visitors will be able to learn how and when were the first exploration of what and in what quantities extracted in the Tyumen region. "The mineral wealth of Western Siberia" is one of the main permanent exhibitions of the Museum, which is a rare minerals and precious minerals. The Central object of the exhibition is a map of the area, which is made of precious stones.
Is the advice useful?
See also
Подписывайтесь на наш канал